Home » Articles » Self-regulation of the Psyche

Self-regulation of the psyche. A concept based on the compensatory relationship between consciousness and the unconscious. (See also adaptation, compensation, neurosis, opposites and transcendent function.)

The psyche does not merely react, it gives its own specific answer to the influences at work upon it. [“Some Crucial Points in Psychoanalysis,” CW 4, par. 665.] 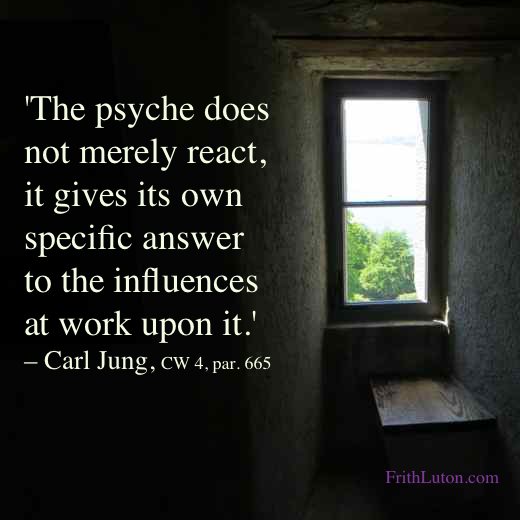 The process of self-regulation is going on all the time within the psyche. It only becomes noticeable when ego-consciousness has particular difficulty in adapting to external or internal reality. That is often the start of a process, proceeding along the lines outlined in the chart (below), that may lead to individuation.

The Self-regulation of the Psyche

5. Unconscious or half-conscious conflict between ego and contents activated in the unconscious. Inner tension. Defensive reactions.

6. Activation of the transcendent function, involving the self and archetypal patterns of wholeness.

8. Transfer of energy between unconscious contents and consciousness. Enlargement of the ego, progression of energy.

Consciousness and the unconscious seldom agree as to their contents and their tendencies. The self-regulating activities of the psyche, manifest in dreams, fantasies and synchronistic experiences, attempt to correct any significant imbalance. According to Jung, this is necessary for several reasons:

(1) Consciousness possesses a threshold intensity which its contents must have attained, so that all elements that are too weak remain in the unconscious.

(2) Consciousness, because of its directed functions, exercises an inhibition (which Freud calls censorship) on all incompatible material, with the result that it sinks into the unconscious.

(3) Consciousness constitutes the momentary process of adaptation, whereas the unconscious contains not only all the forgotten material of the individual’s own past, but all the inherited behaviour traces constituting the structure of the mind [i.e., archetypes].

(4) The unconscious contains all the fantasy combinations which have not yet attained the threshold intensity, but which in the course of time and under suitable conditions will enter the light of consciousness. [“The Transcendent Function,” CW 8, par. 132.]