Libido can never be apprehended except in a definite form; that is to say, it is identical with fantasy-images. And we can only release it from the grip of the unconscious by bringing up the corresponding fantasy-images. [“The Technique of Differentiation,” CW 7, par. 345.] 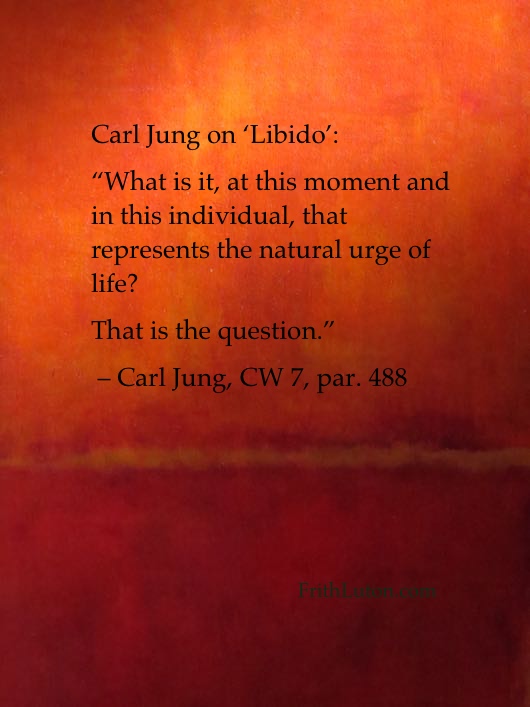 Jung specifically distanced his concept of libido from that of Freud, for whom it had a predominantly sexual meaning.

All psychological phenomena can be considered as manifestations of energy, in the same way that all physical phenomena have been understood as energic manifestations ever since Robert Mayer discovered the law of the conservation of energy. Subjectively and psychologically, this energy is conceived as desire. I call it libido, using the word in its original sense, which is by no means only sexual. [“Psychoanalysis and Neurosis,” CW 4, par. 567.]

[Libido] denotes a desire or impulse which is unchecked by any kind of authority, moral or otherwise. Libido is appetite in its natural state. From the genetic point of view it is bodily needs like hunger, thirst, sleep, and sex, and emotional states or affects, which constitute the essence of libido. [“The Concept of Libido,” CW 5, par. 194.]

In line with his belief that the psyche is a self-regulating system, Jung associated libido with intentionality. It “knows” where it ought to go for the overall health of the psyche.

The libido has, as it were, a natural penchant: it is like water, which must have a gradient if it is to flow. [“Symbols of the Mother and of Rebirth,” ibid., par. 337.]

Where there is a lack of libido (depression), it has backed up (regressed) in order to stir up unconscious contents, the aim being to compensate the attitudes of consciousness. What little energy is left resists being applied in a consciously chosen direction.

It does not lie in our power to transfer “disposable” energy at will to a rationally chosen object. The same is true in general of the apparently disposable energy which is disengaged when we have destroyed its unserviceable forms through the corrosive of reductive analysis. [It] can at best be applied voluntarily for only a short time. But in most cases it refuses to seize hold, for any length of time, of the possibilities rationally presented to it. Psychic energy is a very fastidious thing which insists on fulfilment of its own conditions. However much energy may be present, we cannot make it serviceable until we have succeeded in finding the right gradient. [“The Problem of the Attitude-Type,” CW 7, par. 76]

The analytic task in such a situation is to discover the natural gradient of the person’s energy.

What is it, at this moment and in this individual, that represents the natural urge of life? That is the question. [“The Structure of the Unconscious,” ibid., par. 488.]