Transcendent function. A psychic function that arises from the tension between consciousness and the unconscious and supports their union. (See also opposites and tertium non datur.) 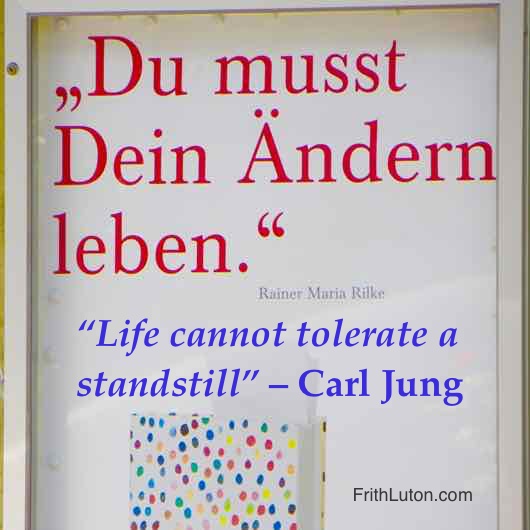 When there is full parity of the opposites, attested by the ego’s absolute participation in both, this necessarily leads to a suspension of the will, for the will can no longer operate when every motive has an equally strong countermotive. Since life cannot tolerate a standstill, a damming up of vital energy results, and this would lead to an insupportable condition did not the tension of opposites produce a new, uniting function that transcends them. This function arises quite naturally from the regression of libido caused by the blockage. [“Definitions,” CW 6, par. 824.]

The tendencies of the conscious and the unconscious are the two factors that together make up the transcendent function. It is called “transcendent” because it makes the transition from one attitude to another organically possible. [“The Transcendent Function,” CW 8, par. 145.]

Development of the Transcendent Function

In a conflict situation, or a state of depression for which there is no apparent reason, the development of the transcendent function depends on becoming aware of unconscious material. This is most readily available in dreams, but because they are so difficult to understand Jung considered the method of active imagination – giving “form” to dreams, fantasies, etc. – to be more useful.

Once the unconscious content has been given form and the meaning of the formulation is understood, the question arises as to how the ego will relate to this position, and how the ego and the unconscious are to come to terms. This is the second and more important stage of the procedure, the bringing together of opposites for the production of a third: the transcendent function. At this stage it is no longer the unconscious that takes the lead, but the ego. [Ibid., par. 181.]

This process requires an ego that can maintain its standpoint in face of the counterposition of the unconscious. Both are of equal value. The confrontation between the two generates a tension charged with energy and creates a living, third essence.

From the activity of the unconscious there now emerges a new content, constellated by thesis and antithesis in equal measure and standing in a compensatory relation to both. It thus forms the middle ground on which the opposites can be united. If, for instance, we conceive the opposition to be sensuality versus spirituality, then the mediatory content born out of the unconscious provides a welcome means of expression for the spiritual thesis, because of its rich spiritual associations, and also for the sensual antithesis, because of its sensuous imagery. The ego, however, torn between thesis and antithesis, finds in the middle ground its own counterpart, its sole and unique means of expression, and it eagerly seizes on this in order to be delivered from its division. [“Definitions,” CW 6, par. 825.]

The transcendent function is essentially an aspect of the self-regulation of the psyche. It typically manifests symbolically and is experienced as a new attitude toward oneself and life.

If the mediatory product remains intact, it forms the raw material for a process not of dissolution but of construction, in which thesis and antithesis both play their part. In this way it becomes a new content that governs the whole attitude, putting an end to the division and forcing the energy of the opposites into a common channel. The standstill is overcome and life can flow on with renewed power towards new goals. [Ibid., par. 827.]

Note on the text in the image: The german text by Rainer Maria Rilke is a play on the command: “You must change your life!” Instead, the quote translates as: “You must live your changes!” It is, in effect, a shift of emphasis from the stasis of life, on the fixity and the tendency toward routine, to a focus on the mutability of life. It is saying in effect, “No your life is not as fixed as you think. It is changing all the time. And you must embrace those changes, not resist them.”