The inferior function is practically identical with the dark side of the human personality. [“Concerning Rebirth,” CW 9i, par. 222.] 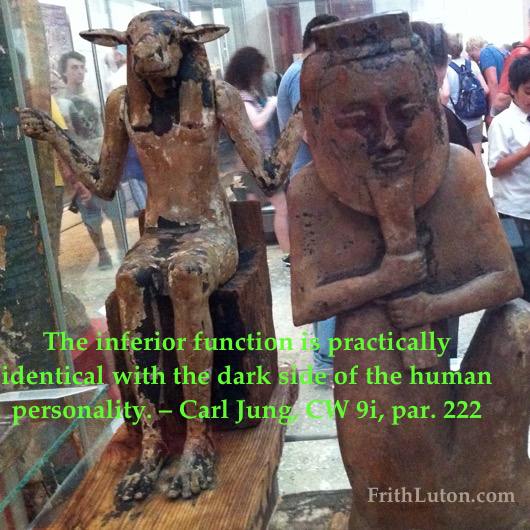 In Jung’s model of typology, the inferior or fourth function is opposite to the superior or primary function. Whether it operates in an introverted or extraverted way, it behaves like an autonomous complex; its activation is marked by affect and it resists integration.

The inferior function secretly and mischievously influences the superior function most of all, just as the latter represses the former most strongly. [“The Phenomenology of the Spirit in Fairytales,” ibid., par. 431.]

Positive as well as negative occurrences can constellate the inferior counter-function. When this happens, sensitiveness appears. Sensitiveness is a sure sign of of the presence of inferiority. This provides the psychological basis for discord and misunderstanding, not only as between two people, but also in ourselves. The essence of the inferior function is autonomy: it is independent, it attacks, it fascinates and so spins us about that we are no longer masters of ourselves and can no longer rightly distinguish between ourselves and others. [“The Problem of the Attitude-Type,” CW 7, par. 85.]

The inferior function is always of the same nature, rational or irrational, as the primary function: when thinking is most developed, the other rational function, feeling, is inferior; if sensation is dominant, then intuition, the other irrational function, is the fourth function, and so on. This accords with general experience: the thinker is tripped up by feeling values; the practical sensation type gets into a rut, blind to the possibilities seen by intuition; the feeling type is deaf to logical thinking; and the intuitive, at home in the inner world, runs afoul of concrete reality.

One may be aware of the perceptions or judgments associated with the inferior function, but these are generally over-ridden by the superior function. Thinking types, for example, do not give their feelings much weight. Sensation types have intuitions, but they are not motivated by them. Similarly, feeling types brush away disturbing thoughts, and intuitives ignore what is right in front of them.

Although the inferior function may be conscious as a phenomenon its true significance nevertheless remains unrecognized. It behaves like many repressed or insufficiently appreciated contents, which are partly conscious and partly unconscious. … Thus in normal cases the inferior function remains conscious, at least in its effects; but in a neurosis it sinks wholly or in part into the unconscious. [“Definitions,” CW 6, par. 764.]

To the extent that a person functions too one-sidedly, the inferior function becomes correspondingly primitive and troublesome. The overly dominant primary function takes energy away from the inferior function, which falls into the unconscious. There it is prone to be activated in an unnatural way, giving rise to infantile desires and other symptoms of imbalance. This is the situation in neurosis.

Development of the Inferior Function

When it becomes desirable or necessary to develop the inferior function, this can only happen gradually.

I have frequently observed how an analyst, confronted with a terrific thinking type, for instance, will do his utmost to develop the feeling function directly out of the unconscious. Such an attempt is foredoomed to failure, because it involves too great a violation of the conscious standpoint. Should the violation nevertheless be successful, a really compulsive dependence of the patient on the analyst ensues, a transference that can only be brutally terminated, because, having been left without a standpoint, the patient has made his standpoint the analyst. … [Therefore] in order to cushion the impact of the unconscious, an irrational type needs a stronger development of the rational auxiliary function present in consciousness [and vice versa]. [“General Description of the Types,” ibid., par. 670.]

Attempts to assimilate the inferior function are usually accompanied by a deterioration in the primary function. The thinking type can’t write an essay, the sensation type gets lost and forgets appointments, the intuitive loses touch with possibilities, and the feeling type can’t decide what something’s worth.

And yet it is necessary for the development of character that we should allow the other side, the inferior function, to find expression. We cannot in the long run allow one part of our personality to be cared for symbiotically by another; for the moment when we might have need of the other function may come at any time and find us unprepared. [“The Problem of the Attitude-Type,” CW 7, par. 86.]

The psychological function that is most differentiated. (Compare inferior function and auxiliary function.) In Jung’s model of typology, the primary or superior function is the one we automatically use because it comes most naturally. 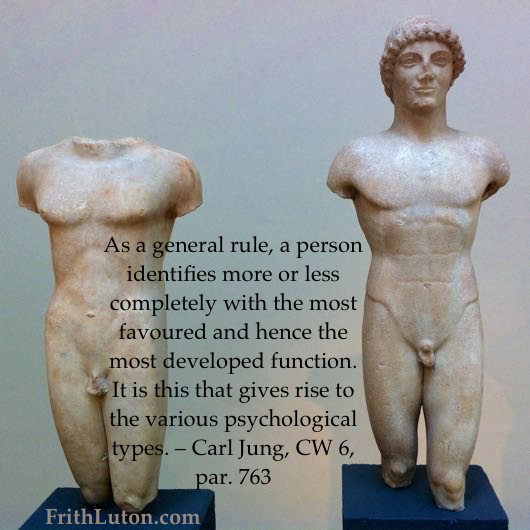 Experience shows that it is practically impossible, owing to adverse circumstances in general, for anyone to develop all his psychological functions simultaneously. The demands of society compel a man to apply himself first and foremost to the differentiation of the function with which he is best equipped by nature, or which will secure him the greatest social success. Very frequently, indeed as a general rule, a man identifies more or less completely with the most favoured and hence the most developed function. It is this that gives rise to the various psychological types. [“Definitions,” CW 6, par. 763.]

In deciding which of the four functions – thinking, feeling, sensation or intuition – is primary, one must closely observe which function is more or less completely under conscious control, and which functions have a haphazard or random character. The superior function (which can manifest in either an introverted or an extraverted way) is always more highly developed than the others, which possess infantile and primitive traits.

The superior function is always an expression of the conscious personality, of its aims, will, and general performance, whereas the less differentiated functions fall into the category of things that simply “happen” to one. [“General Description of the Types,” ibid., par. 575.]

A helpful second or third function, according to Jung’s model of typology, that has a co-determining influence on consciousness. 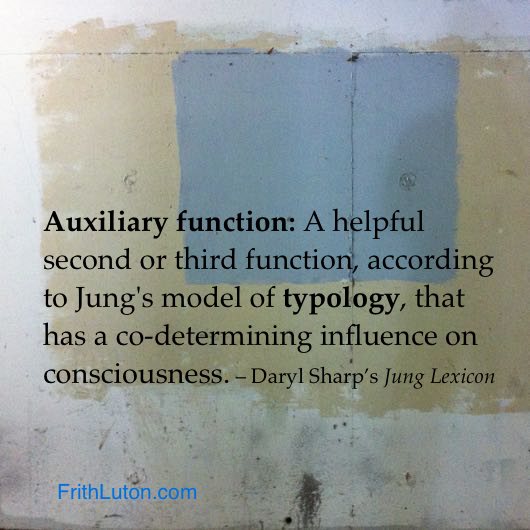 Absolute sovereignty always belongs, empirically, to one function alone, and can belong only to one function, because the equally independent intervention of another function would necessarily produce a different orientation which, partially at least, would contradict the first. But since it is a vital condition for the conscious process of adaptation always to have clear and unambiguous aims, the presence of a second function of equal power is naturally ruled out. This other function, therefore, can have only a secondary importance. … Its secondary importance is due to the fact that it is not, like the primary function …  an absolutely reliable and decisive factor, but comes into play more as an auxiliary or complementary function. [“General Description of the Types,” CW 6, par. 667.]

The resulting combinationspresent the familiar picture of, for instance, practical thinking allied with sensation, speculative thinking forging ahead with intuition, artistic intuition selecting and presenting its images with the help of feeling-values, philosophical intuition systematizing its vision into comprehensive thought by means of a powerful intellect, and so on. [Ibid., par. 669.]