Home » Articles » Symbol and the Symbolic Attitude for Seeking Meaning

Symbol. The best possible expression for something unknown. (See also constructive and final.)

Every psychological expression is a symbol if we assume that it states or signifies something more and other than itself which eludes our present knowledge. [“Definitions,” CW 6, par. 817.] 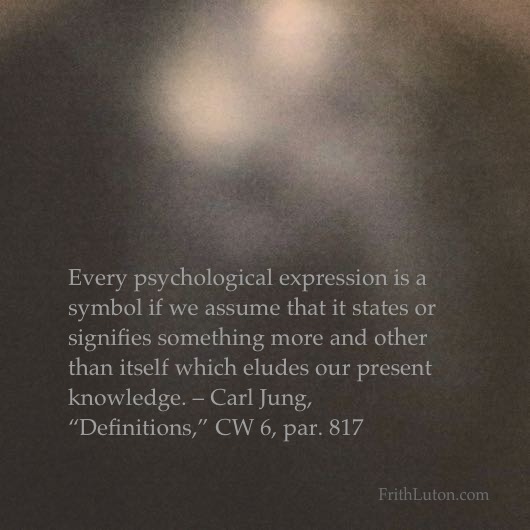 Jung distinguished between a symbol and a sign. Insignia on uniforms, for instance, are not symbols but signs that identify the wearer. In dealing with unconscious material (dreams, fantasies, etc.) the images can be interpreted semiotically, as symptomatic signs pointing to known or knowable facts, or symbolically, as expressing something essentially unknown.

The interpretation of the cross as a symbol of divine love is semiotic, because “divine love” describes the fact to be expressed better and more aptly than a cross, which can have many other meanings. On the other hand, an interpretation of the cross is symbolic when it puts the cross beyond all conceivable explanations, regarding it as expressing an as yet unknown and incomprehensible fact of a mystical or transcendent, i.e., psychological, nature, which simply finds itself most appropriately represented in the cross. [Ibid., par. 815.]

Whether something is interpreted as a symbol or a sign depends mainly on the attitude of the observer. Jung linked the semiotic and symbolic approaches, respectively, to the causal and final points of view. He acknowledged the importance of both.

Psychic development cannot be accomplished by intention and will alone; it needs the attraction of the symbol, whose value quantum exceeds that of the cause. But the formation of a symbol cannot take place until the mind has dwelt long enough on the elementary facts, that is to say until the inner or outer necessities of the life-process have brought about a transformation of energy. [“On Psychic Energy,” CW 8, par. 47.]

The symbolic attitude is at bottom constructive, in that it gives priority to understanding the meaning or purpose of psychological phenomena, rather than seeking a reductive explanation.

There are, of course, neurotics who regard their unconscious products, which are mostly morbid symptoms, as symbols of supreme importance.

Generally, however, this is not what happens. On the contrary, the neurotic of today is only too prone to regard a product that may actually be full of significance as a mere “symptom”. [“Definitions, CW 6, par. 821.]

Jung’s primary interest in symbols lay in their ability to transform and redirect instinctive energy.

How are we to explain religious processes, for instance, whose nature is essentially symbolical? In abstract form, symbols are religious ideas; in the form of action, they are rites or ceremonies. They are the manifestation and expression of excess libido. At the same time they are stepping-stones to new activities, which must be called cultural in order to distinguish them from the instinctual functions that run their regular course according to natural law. [“On Psychic Energy,” CW 8, par. 91.]

The formation of symbols is going on all the time within the psyche, appearing in fantasies and dreams. In analysis, after reductive explanations have been exhausted, symbol-formation is reinforced by the constructive approach. The aim is to make instinctive energy available for meaningful work and a productive life.