Neurosis – A psychological crisis due to a state of disunity with oneself, or, more formally, a mild dissociation of the personality due to the activation of complexes.(See also adaptation, conflict and self-regulation of the psyche.) 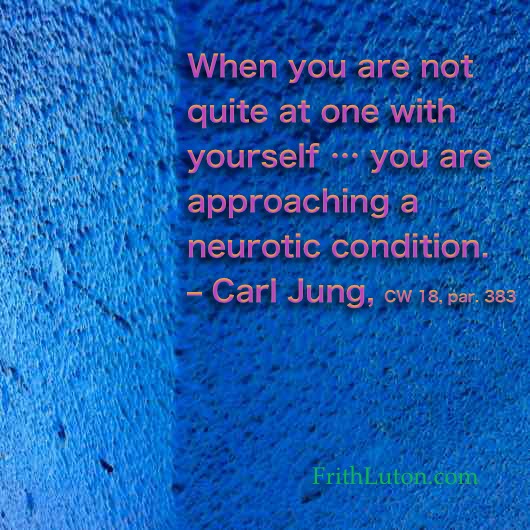 Any incompatibility of character can cause dissociation, and too great a split between the thinking and the feeling function, for instance, is already a slight neurosis. When you are not quite at one with yourself … you are approaching a neurotic condition. [“The Tavistock Lectures,” CW 18, par. 383.]

Every neurosis is characterized by dissociation and conflict, contains complexes, and shows traces of regression and abaissement. [“Analytical Psychology and Education,” CW 17, par. 204.]

The Purpose of Neurosis

Jung’s view was that an outbreak of neurosis is purposeful, an opportunity to become conscious of who we are as opposed to who we think we are. By working through the symptoms that invariably accompany neurosis – anxiety, fear, depression, guilt and particularly conflict – we become aware of our limitations and discover our true strengths.

In many cases we have to say, “Thank heaven he could make up his mind to be neurotic.” Neurosis is really an attempt at self-cure. … It is an attempt of the self-regulating psychic system to restore the balance, in no way different from the function of dreams – only rather more forceful and drastic. [“The Tavistock Lectures,” CW 18, par. 389.]

I myself have known more than one person who owed his entire usefulness and reason for existence to a neurosis, which prevented all the worst follies in his life and forced him to a mode of living that developed his valuable potentialities. These might have been stifled had not the neurosis, with iron grip, held him to the place where he belonged. [“The Problem of the Attitude-Type,” CW 7, par. 68.]

In any breakdown in conscious functioning, energy regresses and unconscious contents are activated in an attempt to compensate the one-sidedness of consciousness.

Neuroses, like all illnesses, are symptoms of maladjustment. Because of some obstacle – a constitutional weakness or defect, wrong education, bad experiences, an unsuitable attitude, etc. – one shrinks from the difficulties which life brings and thus finds oneself back in the world of the infant. The unconscious compensates this regression by producing symbols which, when understood objectively, that is, by means of comparative research, reactivate general ideas that underlie all such natural systems of thought.

In this way a change of attitude is brought about which bridges the dissociation between man as he is and man as he ought to be. [“The Philosophical Tree,” CW 13, par. 473.]

Jung called his attitude toward neurosis energic or final since it was based on the potential progression of energy rather than causal or mechanistic reasons for its regression. The two views are not incompatible but rather complementary: the mechanistic approach looks to the past for the cause of psychic discomfort in the present; Jung focused on the present with an eye to future possibilities.

I no longer seek the cause of a neurosis in the past, but in the present. I ask, what is the necessary task which the patient will not accomplish? [“Psychoanalysis and Neurosis,” CW4, par. 570.]

In psychic disturbances it is by no means sufficient in all cases merely to bring the supposed or real causes to consciousness. The treatment involves the integration of contents that have become dissociated from consciousness. [“The Philosophical Tree,” CW 13, par. 464.]

Jung did not dispute Freudian theory that Oedipal fixations can manifest as neurosis in later life. He acknowledged that certain periods in life, and particularly infancy, often have a permanent and determining influence on the personality. But he found this to be an insufficient explanation for those cases in which there was no trace of neurosis until the time of the breakdown.

Freud’s sexual theory of neurosis is grounded on a true and factual principle. But it makes the mistake of being one-sided and exclusive; also it commits the imprudence of trying to lay hold of unconfinable Eros with the crude terminology of sex. In this respect Freud is a typical representative of the materialistic epoch, whose hope it was to solve the world riddle in a test-tube. [“The Eros Theory,” CW 7, par. 33.]

If the fixation were indeed real [i.e., the primary cause] we should expect to find its influence constant; in other words, a neurosis lasting throughout life. This is obviously not the case. The psychological determination of a neurosis is only partly due to an early infantile predisposition; it must be due to some cause in the present as well. And if we carefully examine the kind of infantile fantasies and occurrences to which the neurotic is attached, we shall be obliged to agree that there is nothing in them that is specifically neurotic. Normal individuals have pretty much the same inner and outer experiences, and may be attached to them to an astonishing degree without developing a neurosis. [“Psychoanalysis and Neurosis,” CW4, par. 564.]

What then determines why one person becomes neurotic while another, in similar circumstances, does not? Jung’s answer is that the individual psyche knows both its limits and its potential. If the former are being exceeded, or the latter not realized, a breakdown occurs. The psyche itself acts to correct the situation.

There are vast masses of the population who, despite their notorious unconsciousness, never get anywhere near a neurosis. The few who are smitten by such a fate are really persons of the “higher” type who, for one reason or another, have remained too long on a primitive level. Their nature does not in the long run tolerate persistence in what is for them an unnatural torpor. As a result of their narrow conscious outlook and their cramped existence they save energy; bit by bit it accumulates in the unconscious and finally explodes in the form of a more or less acute neurosis. [“The Function of the Unconscious,” CW 7, par. 291.]

Jung’s view of neurosis differs radically from the classical reductive approach, but it does not substantially change what happens in analysis. Activated fantasies still have to be brought to light, because the energy needed for life is attached to them. The object, however, is not to reveal a supposed root cause of the neurosis but to establish a connection between consciousness and the unconscious that will result in the renewed progression of energy.