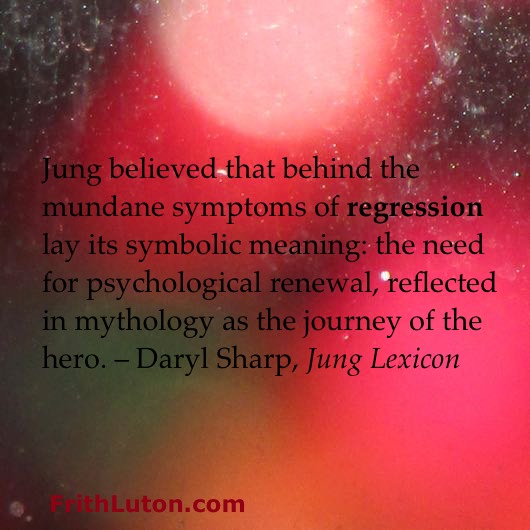 Regression … as an adaptation to the conditions of the inner world, springs from the vital need to satisfy the demands of individuation. [“On Psychic Energy,” ibid., par. 75.]

What robs Nature of its glamour, and life of its joy, is the habit of looking back for something that used to be outside, instead of looking inside, into the depths of the depressive state. This looking back leads to regression and is the first step along that path. Regression is also an involuntary introversion in so far as the past is an object of memory and therefore a psychic content, an endopsychic factor. It is a relapse into the past caused by a depression in the present. [“The Sacrifice,” CW 5, par. 625.]

Jung believed that the blockage of the forward movement of energy is due to the inability of the dominant conscious attitude to adapt to changing circumstances. However, the unconscious contents thereby activated contain the seeds of a new progression. For instance, the opposite or inferior function is waiting in the wings, potentially capable of modifying the inadequate conscious attitude.

If thinking fails as the adapted function, because it is dealing with a situation to which one can adapt only by feeling, then the unconscious material activated by regression will contain the missing feeling function, although still in embryonic form, archaic and undeveloped. Similarly, in the opposite type, regression would activate a thinking function that would effectively compensate the inadequate feeling. [“On Psychic Energy,” CW 8, par. 65.]

The regression of energy confronts us with the problem of our own psychology. From the final point of view, therefore, regression is as necessary in the developmental process as is progression.

Regarded causally, regression is determined, say, by a “mother fixation.” But from the final standpoint the libido regresses to the imago of the mother in order to find there the memory associations by means of which further development can take place, for instance from a sexual system into an intellectual or spiritual system.

The first explanation exhausts itself in stressing the importance of the cause and completely overlooks the final significance of the regressive process. From this angle the whole edifice of civilization becomes a mere substitute for the impossibility of incest. But the second explanation allows us to foresee what will follow from the regression, and at the same time it helps us to understand the significance of the memory-images that have been reactivated. [Ibid., pars. 43f.]

Jung believed that behind the mundane symptoms of regression lay its symbolic meaning: the need for psychological renewal, reflected in mythology as the journey of the hero.

It is precisely the strongest and best among men, the heroes, who give way to their regressive longing and purposely expose themselves to the danger of being devoured by the monster of the maternal abyss. But if a man is a hero, he is a hero because, in the final reckoning, he did not let the monster devour him, but subdued it, not once but many times. Victory over the collective psyche alone yields the true value – the capture of the hoard, the invincible weapon, the magic talisman, or whatever it be that the myth deems most desirable. [“The Relations between the Ego and the Unconscious,” CW 7, par. 261.]