Home » Articles » The Shadow – Conflict with the Persona and Ego Responsibility

Shadow. Hidden or unconscious aspects of oneself, both good and bad, which the ego has either repressed or never recognized. (See also repression.)

Suggestion: In order to work with the shadow, it is often useful to enter a process of Jungian analysis with a qualified Jungian analyst. 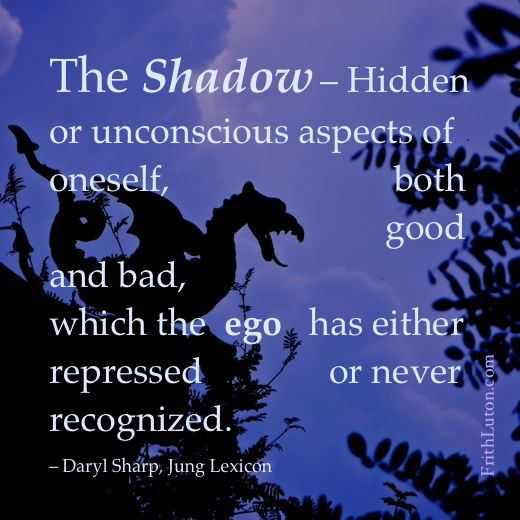 Before unconscious contents have been differentiated, the shadow is in effect the whole of the unconscious. It is commonly personified in dreams by persons of the same sex as the dreamer.

The shadow is composed for the most part of repressed desires and uncivilized impulses, morally inferior motives, childish fantasies and resentments, etc. – all those things about oneself one is not proud of. These unacknowledged personal characteristics are often experienced in others through the mechanism of projection.

Although, with insight and good will, the shadow can to some extent be assimilated into the conscious personality, experience shows that there are certain features which offer the most obstinate resistance to moral control and prove almost impossible to influence. These resistances are usually bound up with projections, which are not recognized as such, and their recognition is a moral achievement beyond the ordinary. While some traits peculiar to the shadow can be recognized without too much difficulty as one’s personal qualities, in this case both insight and good will are unavailing because the cause of the emotion appears to lie, beyond all possibility of doubt, in the other person. [Ibid., par. 16.]

Conflict with the Persona

The realization of the shadow is inhibited by the persona. To the degree that we identify with a bright persona, the shadow is correspondingly dark. Thus shadow and persona stand in a compensatory relationship, and the conflict between them is invariably present in an outbreak of neurosis. The characteristic depression at such times indicates the need to realize that one is not all one pretends or wishes to be.

Assimilation of the Shadow

There is no generally effective technique for assimilating the shadow. It is more like diplomacy or statesmanship and it is always an individual matter. First one has to accept and take seriously the existence of the shadow. Second, one has to become aware of its qualities and intentions. This happens through conscientious attention to moods, fantasies and impulses. Third, a long process of negotiation is unavoidable.

It is a therapeutic necessity, indeed, the first requisite of any thorough psychological method, for consciousness to confront its shadow. In the end this must lead to some kind of union, even though the union consists at first in an open conflict, and often remains so for a long time. It is a struggle that cannot be abolished by rational means. When it is wilfully repressed it continues in the unconscious and merely expresses itself indirectly and all the more dangerously, so no advantage is gained. The struggle goes on until the opponents run out of breath. What the outcome will be can never be seen in advance. The only certain thing is that both parties will be changed. [“Rex and Regina,” CW 14, par. 514.]

This process of coming to terms with the Other in us is well worth while, because in this way we get to know aspects of our nature which we would not allow anybody else to show us and which we ourselves would never have admitted. [“The Conjunction,” ibid., par. 706.]

Responsibility for the shadow rests with the ego. That is why the shadow is a moral problem. It is one thing to realize what it looks like – what we are capable of. It is quite something else to determine what we can live out, or with.

Confrontation with the shadow produces at first a dead balance, a standstill that hampers moral decisions and makes convictions ineffective or even impossible. Everything becomes doubtful. [Ibid., par. 708.]

The shadow is not, however, only the dark underside of the personality. It also consists of instincts, abilities and positive moral qualities that have long been buried or never been conscious.

The shadow is merely somewhat inferior, primitive, unadapted, and awkward; not wholly bad. It even contains childish or primitive qualities which would in a way vitalize and embellish human existence, but – convention forbids! [“Psychology and Religion,” CW 11, par. 134.]

If it has been believed hitherto that the human shadow was the source of all evil, it can now be ascertained on closer investigation that the unconscious man, that is, his shadow, does not consist only of morally reprehensible tendencies, but also displays a number of good qualities, such as normal instincts, appropriate reactions, realistic insights, creative impulses, etc. [“Conclusion,” CW 9ii, par. 423.]

An outbreak of neurosis constellates both sides of the shadow: those qualities and activities one is not proud of, and new possibilities one never knew were there.

Jung distinguished between the personal and the collective or archetypal shadow.

With a little self-criticism one can see through the shadow – so far as its nature is personal. But when it appears as an archetype, one encounters the same difficulties as with anima and animus. In other words, it is quite within the bounds of possibility for a man to recognize the relative evil of his nature, but it is a rare and shattering experience for him to gaze into the face of absolute evil. [“The Shadow,” ibid., par. 19.]

Further reading: In order to work with the shadow, it is often useful to enter a process of Jungian analysis with a qualified Jungian analyst.