The puer aeternus or the puella aeternus typically leads an adventurous but provisional life, as the fear of being fenced in is great. Jung comments:

The “eternal child” in man is an indescribable experience, an incongruity, a handicap, and a divine prerogative; an imponderable that determines the ultimate worth or worthlessness of a personality. [CW 9i, par. 300]

This lecture: Puer Aeternus explores the territory of the ‘forever young’ and the kind of healing possible when one asks Jung’s central question:

I no longer seek the cause of a neurosis in the past, but in the present. I ask, what is the necessary task which the patient will not accomplish? [“Psychoanalysis and Neurosis”, CW4, par. 570]

“For the time being one is doing this or that, but whether it is a woman or a job, it is not yet what is really wanted, and there is always the fantasy that sometime in the future the real thing will come about…. BUT The one thing dreaded throughout by such a type of man is to be bound to anything whatever.” 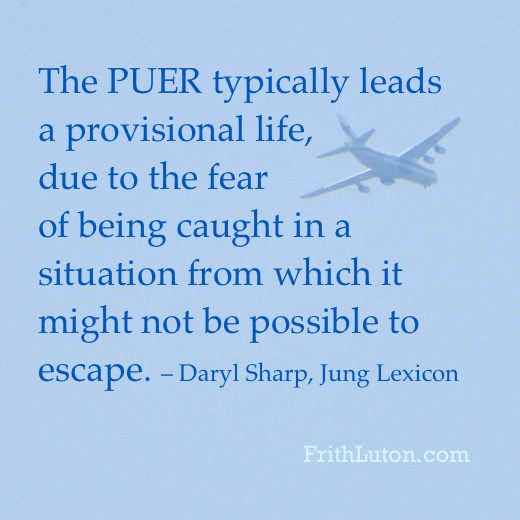 The puer aeternus  typically leads a provisional life, due to the fear of being caught in a situation from which it might not be possible to escape. His lot is seldom what he really wants and one day he will do something about it – but not just yet. Plans for the future slip away in fantasies of what will be, what could be, while no decisive action is taken to change. He covets independence and freedom, chafes at boundaries and limits, and tends to find any restriction intolerable.

Common symptoms of puer psychology are dream images of being fettered or fenced in, or imprisoned. Life itself, existential reality, is experienced as a prison. The bars and chains are unconscious constraints and ties to the unfettered world of early life.

Jung says of such a stasis: “You must get through it, not ABOVE and AWAY from it! Emotional honesty is needed, as the highest value, which gives life and meaning has got lost.”

Generally it is the puer’s fate to ‘find himself’, his groundedness, (that is, to come down to earth or to get real, in midlife or even later).

And the puer aeternus or puella generally has the charm, enthusiasm and exuberance of youth, often creative and inclined to spiritual values. These qualities, though magnetic are often ‘over the top’ and can easily become the stuff of comedy or of flying too high as did the famous mythological figure Icarus.