Projection. An automatic process whereby contents of one’s own unconscious are perceived to be in others. (See also archaic, identification and participation mystique.)

Just as we tend to assume that the world is as we see it, we naïvely suppose that people are as we imagine them to be. … All the contents of our unconscious are constantly being projected into our surroundings, and it is only by recognizing certain properties of the objects as projections or imagos that we are able to distinguish them from the real properties of the objects. … Cum grano salis, we always see our own unavowed mistakes in our opponent. Excellent examples of this are to be found in all personal quarrels. Unless we are possessed of an unusual degree of self-awareness we shall never see through our projections but must always succumb to them, because the mind in its natural state presupposes the existence of such projections. It is the natural and given thing for unconscious contents to be projected. [“General Aspects of Dream Psychology,” ibid., par. 507.] 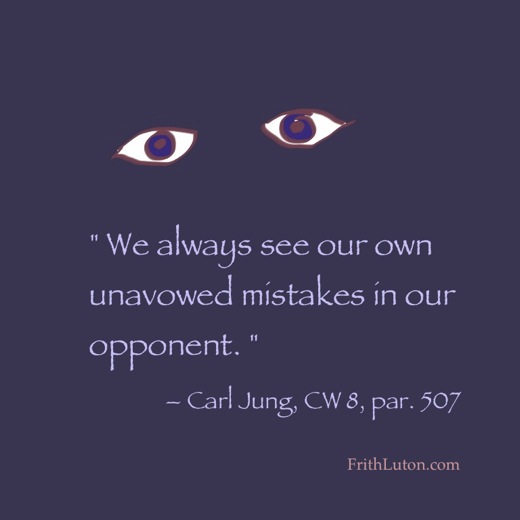 Projection means the expulsion of a subjective content into an object; it is the opposite of introjection. Accordingly, it is a process of dissimilation, by which a subjective content becomes alienated from the subject and is, so to speak, embodied in the object. The subject gets rid of painful, incompatible contents by projecting them. [“Definitions,” CW 6, par. 783.]

Not a Conscious Process

Projection is not a conscious process. One meets with projections, one does not make them.

The general psychological reason for projection is always an activated unconscious that seeks expression. [“The Tavistock Lectures,” CW 18, par. 352.]

It is possible to project certain characteristics onto another person who does not possess them at all, but the one being projected upon may unconsciously encourage it.

Imaginary Relationships, Disconnect from Reality due to Projection

Through projection one can create a series of imaginary relationships that often have little or nothing to do with the outside world.

The effect of projection is to isolate the subject from his environment, since instead of a real relation to it there is now only an illusory one. Projections change the world into the replica of one’s own unknown face. In the last analysis, therefore, they lead to an autoerotic or autistic condition in which one dreams a world whose reality remains forever unattainable. [“The Shadow,” CW 9ii, par. 17.]

Projection also has positive effects. In everyday life it facilitates interpersonal relations. In addition, when we assume that some quality or characteristic is present in another, and then, through experience, find that this is not so, we can learn something about ourselves. This involves withdrawing or dissolving projections.

So long as the libido can use these projections as agreeable and convenient bridges to the world, they will alleviate life in a positive way. But as soon as the libido wants to strike out on another path, and for this purpose begins running back along the previous bridges of projection, they will work as the greatest hindrances it is possible to imagine, for they effectively prevent any real detachment from the former object. [“General Aspects of Dream Psychology,” CW 8, par. 507.]

The need to withdraw projections is generally signaled by frustrated expectations in relationships, accompanied by strong affect. But Jung believed that until there is an obvious discordance between what we imagine to be true and the reality we are presented with, there is no need to speak of projections, let alone withdraw them.

Projection … is properly so called only when the need to dissolve the identity with the object has already arisen. This need arises when the identity becomes a disturbing factor, i.e., when the absence of the projected content is a hindrance to adaptation and its withdrawal into the subject has become desirable. From this moment the previous partial identity acquires the character of projection. The term projection therefore signifies a state of identity that has become noticeable. [“Definitions,” CW 6, par. 783.] 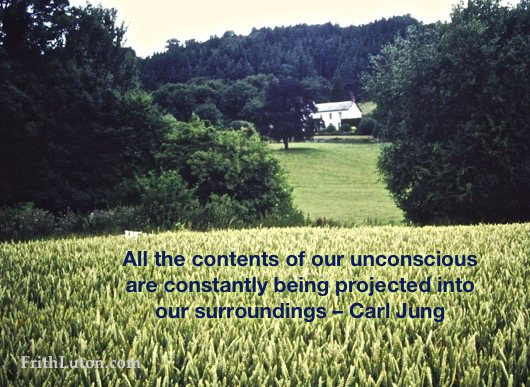 Jung distinguished between passive projection and active projection. Passive projection is completely automatic and unintentional, like falling in love. The less we know about another person, the easier it is to passively project unconscious aspects of ourselves onto them.

Active projection is better known as empathy – we feel ourselves into the other’s shoes. Empathy that extends to the point where we lose our own standpoint becomes identification.

The projection of the personal shadow generally falls on persons of the same sex. On a collective level, it gives rise to war, scapegoating and confrontations between political parties. Projection that takes place in the context of a therapeutic relationship is called transference or countertransference, depending on whether the analysand or the analyst is the one projecting.

In terms of the contrasexual complexes, anima and animus, projection is both a common cause of animosity and a singular source of vitality.

When animus and anima meet, the animus draws his sword of power and the anima ejects her poison of illusion and seduction. The outcome need not always be negative, since the two are equally likely to fall in love. [“The Syzygy: Anima and Animus,” CW 9ii, par. 30.]