Transference – A particular case of projection, used to describe the unconscious, emotional bond that arises in the analysand toward the analyst. (See also countertransference.) 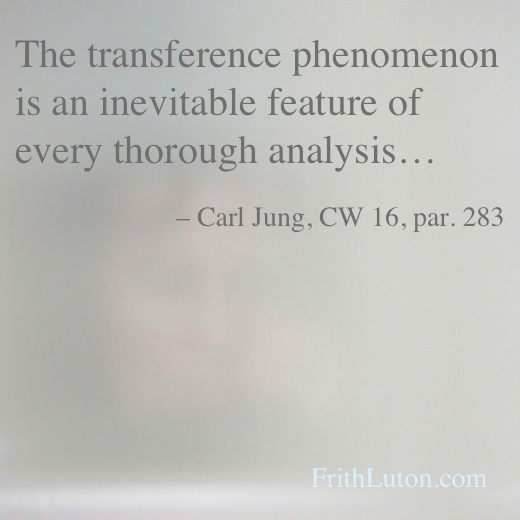 Unconscious contents are invariably projected at first upon concrete persons and situations. Many projections can ultimately be integrated back into the individual once he has recognized their subjective origin; others resist integration, and although they may be detached from their original objects, they thereupon transfer themselves to the doctor. Among these contents the relation to the parent of opposite sex plays an important part, i.e., the relation of son to mother, daughter to father, and also that of brother to sister. [“The Psychology of the Transference,” CW 16, par. 357.]

Once the projections are recognized as such, the particular form of rapport known as the transference is at an end, and the problem of individual relationship begins. [“The Therapeutic Value of Abreaction,” ibid., par. 287.]

A transference may be either positive or negative; the former is marked by feelings of affection and respect, the latter by hostility and resistance.

For one type of person (called the infantile-rebel) a positive transference is, to begin with, an important achievement with a healing significance; while for the other (the infantile-obedient) it is a dangerous backsliding, a convenient way of evading life’s duties. For the first a negative transference denotes increased insubordination, hence a backsliding and an evasion of life’s duties, for the second it is a step forward with a healing significance. [“Some Crucial Points in Psychoanalysis,” CW 4, par. 659.]

Jung did not regard the transference merely as a projection of infantile-erotic fantasies. Though these may be present at the beginning of analysis, they can be dissolved through the reductive method. Then the purpose of the transference becomes the main issue and guide.

An exclusively sexual interpretation of dreams and fantasies is a shocking violation of the patient’s psychological material: infantile-sexual fantasy is by no means the whole story, since the material also contains a creative element, the purpose of which is to shape a way out of the neurosis. [“The Therapeutic Value of Abreaction,” CW 16, par. 277.]

Although Jung made contradictory statements about the therapeutic importance of the transference – for instance:

The transference phenomenon is an inevitable feature of every thorough analysis, for it is imperative that the doctor should get into the closest possible touch with the patient’s line of psychological development. [Ibid., par. 283.]

We do not work with the “transference to the analyst,” but against it and in spite of it. [“Some Crucial Points in Psychoanalysis,” CW 4, par. 601.]

A transference is always a hindrance; it is never an advantage. [“The Tavistock Lectures,” CW 18, par. 349.]

Medical treatment of the transference gives the patient a priceless opportunity to withdraw his projections, to make good his losses, and to integrate his personality. [“The Psychology of the Transference,” CW 16, par. 420.]

– he did not doubt its significance when it was present.

The suitably trained analyst mediates the transcendent function for the patient, i.e., helps him to bring conscious and unconscious together and so arrive at a new attitude. … The patient clings by means of the transference to the person who seems to promise him a renewal of attitude; through it he seeks this change, which is vital to him, even though he may not be conscious of doing so. For the patient, therefore, the analyst has the character of an indispensable figure absolutely necessary for life. [“The Transcendent Function,” CW 8, par. 146.]

Whatever is unconscious in the analysand and needed for healthy functioning is projected onto the analyst. This includes archetypal images of wholeness, with the result that the analyst takes on the stature of a mana-personality. The analysand’s task is then to understand such images on the subjective level, a primary aim being to constellate the patient’s own inner analyst.

Empathy is an important purposive element in the transference. By means of empathy the analysand attempts to emulate the presumably healthier attitude of the analyst, and thereby to attain a better level of adaptation.

The patient is bound to the analyst by ties of affection or resistance and cannot help following and imitating his psychic attitude. By this means he feels his way along (empathy). And with the best will in the world and for all his technical skill the analyst cannot prevent it, for empathy works surely and instinctively in spite of conscious judgment, be it never so strong. [“Some Crucial Points in Psychoanalysis,” CW 4, par. 661.]

Jung believed that analyzing the transference was extremely important in order to return projected contents necessary for the individuation of the analysand. But he pointed out that even after projections have been withdrawn there remains a strong connection between the two parties. This is because of an instinctive factor that has few outlets in modern society: kinship libido.

Everyone is now a stranger among strangers. Kinship libido – which could still engender a satisfying feeling of belonging together, as for instance in the early Christian communities – has long been deprived of its object. But, being an instinct, it is not to be satisfied by any mere substitute such as a creed, party, nation, or state. It wants the human connection. That is the core of the whole transference phenomenon, and it is impossible to argue it away, because relationship to the self is at once relationship to our fellow man, and no one can be related to the latter until he is related to himself. [“The Psychology of the Transference,” CW 16, par. 445.]

If this topic has touched you, one way to follow up is to engage in a Jungian analysis process.

To help you further explore this, here are some helpful articles and pages from this website:

Jungian Analysis – an Adventure into the Self explores Jungian analysis.

You can learn more about me at Jungian Analyst – Melbourne.