Anima. Definition: The inner feminine side of a man. (See also animus, Eros, Logos and soul-image.)
The anima is both a personal complex and an archetypal image of woman in the male psyche. It is an unconscious factor incarnated anew in every male child, and is responsible for the mechanism of projection. Initially identified with the personal mother, the anima is later experienced not only in other women but as a pervasive influence in a man’s life. 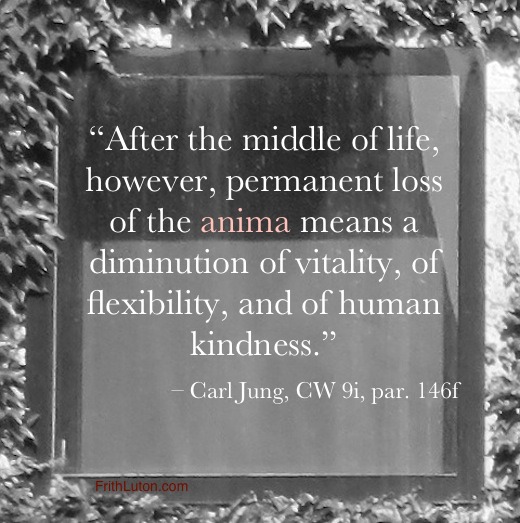 The anima is the archetype of life itself. [“Archetypes of the Collective Unconscious,” CW 9i, par. 66.]

There is [in man] an imago not only of the mother but of the daughter, the sister, the beloved, the heavenly goddess, and the chthonic Baubo. Every mother and every beloved is forced to become the carrier and embodiment of this omnipresent and ageless image, which corresponds to the deepest reality in a man. It belongs to him, this perilous image of Woman. The Anima stands for the loyalty which in the interests of life he must sometimes forego. She is the much needed compensation for the risks, struggles, sacrifices that all end in disappointment. She is the solace for all the bitterness of life. And, at the same time, she is the great illusionist, the seductress, who draws him into life with her Maya – and not only into life’s reasonable and useful aspects, but into its frightful paradoxes and ambivalences where good and evil, success and ruin, hope and despair, counterbalance one another. Because she is his greatest danger she demands from a man his greatest, and if he has it in him she will receive it. [“The Syzygy: Anima and Animus,” CW 9ii, par. 24]

The anima is personified in dreams by images of women ranging from seductress to spiritual guide. It is associated with the eros principle, hence a man’s anima development is reflected in how he relates to women. Within his own psyche, the anima functions as his soul, influencing his ideas, attitudes and emotions.

The anima is not the soul in the dogmatic sense, not an anima rationalis, which is a philosophical conception, but a natural archetype that satisfactorily sums up all the statements of the unconscious, of the primitive mind, of the history of language and religion. … It is always the a priori element in [a man’s] moods, reactions, impulses, and whatever else is spontaneous in psychic life.[“Archetypes of the Collective Unconscious,” CW 9i, par. 57.]

The anima … intensifies, exaggerates, falsifies, and mythologizes all emotional relations with his work and with other people of both sexes. The resultant fantasies and entanglements are all her doing. When the anima is strongly constellated, she softens the man’s character and makes him touchy, irritable, moody, jealous, vain, and unadjusted. [“Concerning the Archetypes and the Anima Concept,”[ ibid., par. 144.]

Anima and the Persona

As an inner personality, the anima is complementary to the persona and stands in a compensatory relationship to it.

The persona, the ideal picture of a man as he should be, is inwardly compensated by feminine weakness. As the individual outwardly plays the strong man, so he becomes inwardly a woman, i.e., the anima, for it is the anima that reacts to the persona. But because the inner world is dark and invisible … and because a man is all the less capable of conceiving his weaknesses the more he is identified with the persona, the persona’s counterpart, the anima, remains completely in the dark and is at once projected, so that our hero comes under the heel of his wife’s slipper. [“Anima and Animus,” CW 7, par. 309.]

Hence the character of the anima can generally be deduced from that of the persona; all those qualities absent from the outer attitude will be found in the inner.

The tyrant tormented by bad dreams, gloomy forebodings, and inner fears is a typical figure. Outwardly ruthless, harsh, and unapproachable, he jumps inwardly at every shadow, is at the mercy of every mood, as though he were the feeblest and most impressionable of men. Thus his anima contains all those fallible human qualities his persona lacks. If the persona is intellectual, the anima will certainly be sentimental. [“Definitions,” CW 6, par. 804.]

Similarly, where a man identifies with the persona, he is in effect possessed by the anima, with attendant symptoms.

Identity with the persona automatically leads to an unconscious identity with the anima because, when the ego is not differentiated from the persona, it can have no conscious relation to the unconscious processes. Consequently it is these processes, it is identical with them. Anyone who is himself his outward role will infallibly succumb to the inner processes; he will either frustrate his outward role by absolute inner necessity or else reduce it to absurdity, by a process of enantiodromia. He can no longer keep to his individual way, and his life runs into one deadlock after another. Moreover, the anima is inevitably projected upon a real object, with which he gets into a relation of almost total dependence.[Ibid., par. 807.]

Four Stages of the Anima

Jung distinguished four broad stages of the anima, analogous to levels of the Eros cult described in the late classical period. He personified them as Eve, Helen, Mary and Sophia. [“The Psychology of the Transference,” CW 16, par. 361. ]

In the first stage, Eve, the anima is indistinguishable from the personal mother. The man cannot function well without a close tie to a woman.

In the second stage, personified in the historical figure of Helen of Troy, the anima is a collective and ideal sexual image (“All is dross that is not Helen” – Marlowe).

The third stage, Mary, manifests in religious feelings and a capacity for lasting relationships.

In the fourth stage, as Sophia (called Wisdom in the Bible), a man’s anima functions as a guide to the inner life, mediating to consciousness the contents of the unconscious. She cooperates in the search for meaning and is the creative muse in an artist’s life.

Ideally, a man’s anima proceeds naturally through these stages as he grows older. In fact, as an archetypal life force, the anima manifests in whatever shape or form is necessary to compensate the dominant conscious attitude.

So long as the anima is unconscious, everything she stands for is projected. Most commonly, because of the initially close tie between the anima and the protective mother-imago, this projection falls on the partner, with predictable results.

[A man’s] ideal of marriage is so arranged that his wife has to take over the magical role of the mother. Under the cloak of the ideally exclusive marriage he is really seeking his mother’s protection, and thus he plays into the hands of his wife’s possessive instincts. His fear of the dark incalculable power of the unconscious gives his wife an illegitimate authority over him, and forges such a dangerously close union that the marriage is permanently on the brink of explosion from internal tension. [“Anima and Animus,” CW 7, par. 316.]

No matter where a man is in terms of psychological development, he is always prone to see aspects of his anima, his soul, in an actual woman. The same is true of the animus. Their personal aspects may be integrated and their significance understood, but their essential nature cannot be exhausted.

Though the effects of anima and animus can be made conscious, they themselves are factors transcending consciousness and beyond the reach of perception and volition. Hence they remain autonomous despite the integration of their contents, and for this reason they should be borne constantly in mind. [The Syzygy: Anima and Animus,” CW 9ii, par. 40.]

The psychological priority in the first half of life is for a man to free himself from the anima fascination of the mother. In later life, the lack of a conscious relationship with the anima is attended by symptoms characteristic of “loss of soul.”

Younger people … can bear even the total loss of the anima without injury. The important thing at this stage is for a man to be a man. … After the middle of life, however, permanent loss of the anima means a diminution of vitality, of flexibility, and of human kindness. The result, as a rule, is premature rigidity, crustiness, stereotypy, fanatical one-sidedness, obstinacy, pedantry, or else resignation, weariness, sloppiness, irresponsibility, and finally a childish ramollissement [petulance] with a tendency to alcohol. [“Concerning the Archetypes and the Anima Concept,” CW 9i, par. 146f.]

One way for a man to become familiar with the nature of his anima is through the method of active imagination. This is done by personifying her as an autonomous personality, asking her questions and attending to the response.

I mean this as an actual technique. … The art of it consists only in allowing our invisible partner to make herself heard, in putting the mechanism of expression momentarily at her disposal, without being overcome by the distaste one naturally feels at playing such an apparently ludicrous game with oneself, or by doubts as to the genuineness of the voice of one’s interlocutor. [“Anima and Animus,” CW 7, pars. 323f.]

Transformation of the Anima

Jung suggested that if the encounter with the shadow is the “apprentice-piece” in a man’s development, then coming to terms with the anima is the “master-piece.” [“Archetypes of the Collective Unconscious,” CW 9i, par. 61.] The goal is her transformation from a troublesome adversary into a function of relationship between consciousness and the unconscious. Jung called this “the conquest of the anima as an autonomous complex.”

With the attainment of this goal it becomes possible to disengage the ego from all its entanglements with collectivity and the collective unconscious. Through this process the anima forfeits the daemonic power of an autonomous complex; she can no longer exercise the power of possession, since she is depotentiated. She is no longer the guardian of treasures unknown; no longer Kundry, daemonic Messenger of the Grail, half divine and half animal; no longer is the soul to be called “Mistress,” but a psychological function of an intuitive nature, akin to what the primitives mean when they say, “He has gone into the forest to talk with the spirits” or “My snake spoke with me” or, in the mythological language of infancy, “A little bird told me.” [“The Mana-Personality,” CW 7, par. 374.]