Every civilized human being, however high his conscious development, is still an archaic man at the deeper levels of his psyche. [“Archaic Man,” CW 10, par. 105] 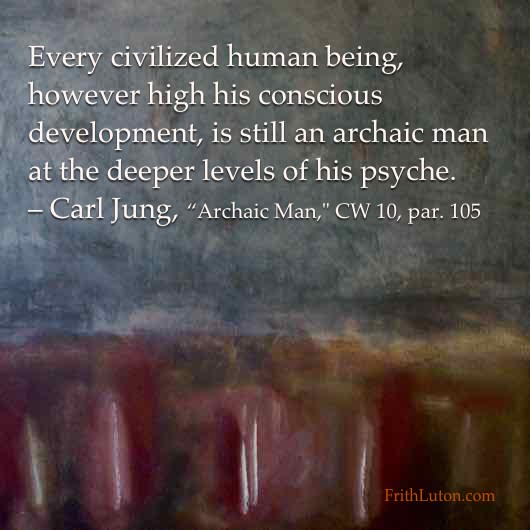 In anthropology, the term ‘archaic’ is generally descriptive of primitive psychology.

Jung used it when referring to thoughts, fantasies and feelings that are not consciously differentiated.

Archaism attaches primarily to the fantasies of the unconscious, i.e., to the products of unconscious fantasy activity which reach consciousness. An image has an archaic quality when it possesses unmistakable mythological parallels. Archaic, too, are the associations-by-analogy of unconscious fantasy, and so is their symbolism. The relation of identity with an object, or participation mystique, is likewise archaic. Concretism of thought and feeling is archaic; also compulsion and inability to control oneself (ecstatic or trance state, possession, etc.). Fusion of the psychological functions, of thinking with feeling, feeling with sensation, feeling with intuition, and so on, is archaic, as is also the fusion of part of a function with its counterpart. [“Definitions,” CW 6, par. 684.]