Identification. A psychological process in which the personality is partially or totally dissimilated. (See also participation mystique and projection.)

Identity, denoting an unconscious conformity between subject and object, oneself and others, is the basis for identification, projection and introjection. 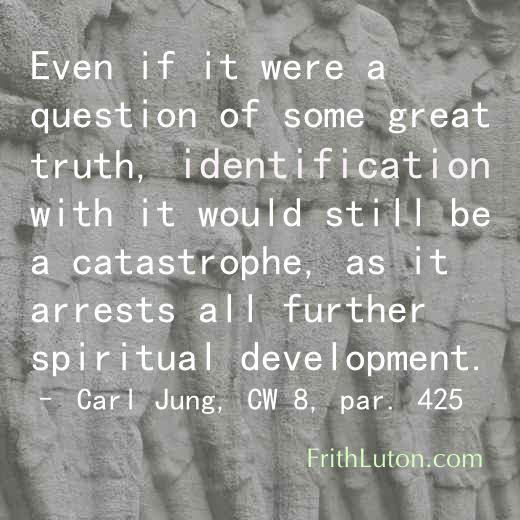 Identity is responsible for the naïve assumption that the psychology of one man is like that of another, that the same motives occur everywhere, that what is agreeable to me must obviously be pleasurable for others, that what I find immoral must also be immoral for them, and so on. It is also responsible for the almost universal desire to correct in others what most needs correcting in oneself. [“Definitions,” ibid., par. 742.]

Identification facilitates early adaptation to the outside world, but in later life becomes a hindrance to individual development.

For example, identification with the father means, in practice, adopting all the father’s ways of behaving, as though the son were the same as the father and not a separate individuality. Identification differs from imitation in that it is an unconscious imitation, whereas imitation is a conscious copying. … Identification can be beneficial so long as the individual cannot go his own way. But when a better possibility presents itself, identification shows its morbid character by becoming just as great a hindrance as it was an unconscious help and support before. It now has a dissociative effect, splitting the individual into two mutually estranged personalities. [Ibid., par. 738.]

Identification with a complex (experienced as possession) is a frequent source of neurosis, but it is also possible to identify with a particular idea or belief.

The ego keeps its integrity only if it does not identify with one of the opposites, and if it understands how to hold the balance between them. This is possible only if it remains conscious of both at once. However, the necessary insight is made exceedingly difficult not by one’s social and political leaders alone, but also by one’s religious mentors. They all want decision in favour of one thing, and therefore the utter identification of the individual with a necessarily one-sided “truth.” Even if it were a question of some great truth, identification with it would still be a catastrophe, as it arrests all further spiritual development. [“On the Nature of the Psyche,” CW 8, par. 425.]

One-sidedness is usually due to identifying with a particular conscious attitude. This can result in losing touch with the compensating powers of the unconscious.

In a case like this the unconscious usually responds with violent emotions, irritability, lack of control, arrogance, feelings of inferiority, moods, depressions, outbursts of rage, etc., coupled with lack of self-criticism and the misjudgments, mistakes, and delusions which this entails. [“The Philosophical Tree,” CW 13, par. 454.]