The apparently unendurable conflict is proof of the rightness of your life. A life without inner contradiction is either only half a life or else a life in the Beyond, which is destined only for angels. But God loves human beings more than the angels. [C.G. Jung Letters, vol. 1, p. 375.]

The self is made manifest in the opposites and in the conflict between them; it is a coincidentia oppositorum [coincidence of opposites]. Hence the way to the self begins with conflict. [“Individual Dream Symbolism in Relation to Alchemy,” CW 12, par. 259.] 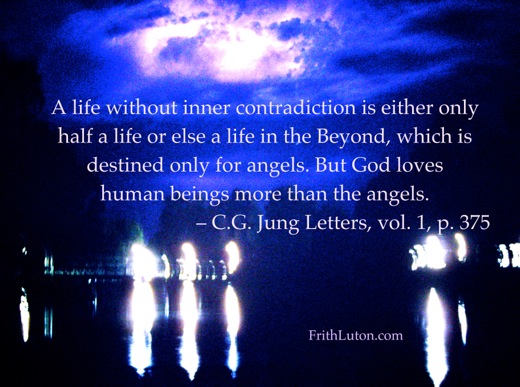 Conflict is a hallmark of neurosis, but conflict is not invariably neurotic. Some degree of conflict is even desirable since without some tension between opposites the developmental process is inhibited. Conflict only becomes neurotic when it interferes with the normal functioning of consciousness.

The stirring up of conflict is a Luciferian virtue in the true sense of the word. Conflict engenders fire, the fire of affects and emotions, and like every other fire it has two aspects, that of combustion and that of creating light. [“Psychological Aspects of the Mother Archetype,” CW 9i, par. 179.]

When a conflict is unconscious, tension manifests as physical symptoms, particularly in the stomach, the back and the neck. Conscious conflict is experienced as moral or ethical tension. Serious conflicts, especially those involving love or duty, generally involve a disparity between the functions of thinking and feeling. If one or the other is not a conscious participant in the conflict, it needs to be introduced.

The objection [may be] advanced that many conflicts are intrinsically insoluble. People sometimes take this view because they think only of external solutions – which at bottom are not solutions at all. … A real solution comes only from within, and then only because the patient has been brought to a different attitude. [“Some Crucial Points in Psychoanalysis,” CW 4, par. 606.]

Jung’s major contribution to the psychology of conflict was his belief that it had a purpose in terms of the self-regulation of the psyche. If the tension between the opposites can be held in consciousness, then something will happen internally to resolve the conflict. The solution, essentially irrational and unforeseeable, generally appears as a new attitude toward oneself and the outer situation, together with a sense of peace; energy previously locked up in indecision is released and the progression of libido becomes possible. Jung called this the tertium non datur or transcendent function, because what happens transcends the opposites.

Holding the tension between opposites requires patience and a strong ego, otherwise a decision will be made out of desperation. Then the opposite will be constellated even more strongly and the conflict will continue with renewed force.

Jung’s basic hypothesis in working with neurotic conflict was that separate personalities in oneself – complexes – were involved. As long as these are not made conscious they are acted out externally, through projection. Conflicts with other people are thus essentially externalizations of an unconscious conflict within oneself.