Home » Articles » The Unconscious – Creativity and Compensating the Conscious Ego

Unconscious – The totality of all psychic phenomena that lack the quality of consciousness. (See also collective unconscious.)

The unconscious … is the source of the instinctual forces of the psyche and of the forms or categories that regulate them, namely the archetypes. [“The Structure of the Psyche,” CW 8, par. 342.] 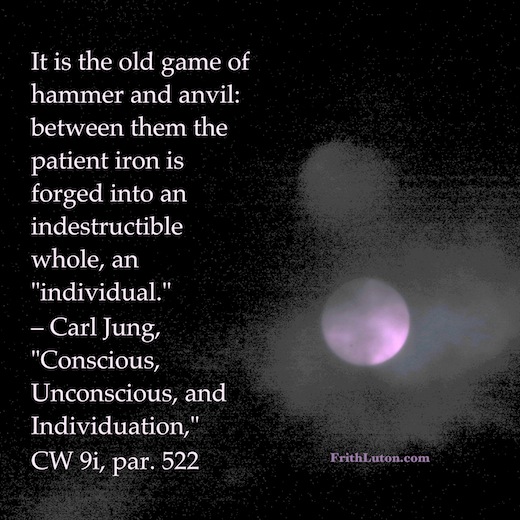 A Psychological Concept, Not Philosophical

The concept of the unconscious is for me an exclusively psychological concept, and not a philosophical concept of a metaphysical nature. In my view the unconscious is a psychological borderline concept, which covers all psychic contents or processes that are not conscious, i.e. not related to the ego in any perceptible way. My justification for speaking of the existence of unconscious processes at all is derived simply and solely from experience. [“Definitions,” CW 6, par. 837.]

The unconscious is both vast and inexhaustible. It is not simply the unknown or the repository of conscious thoughts and emotions that have been repressed, but includes contents that may or will become conscious.

The unconscious also contains “psychoid” functions that are not capable of consciousness and of which we have only indirect knowledge, such as the relationship between matter and spirit.

Whenever the unconscious becomes overactive, it comes to light in symptoms that paralyze conscious action. This is likely to happen when unconscious factors are ignored or repressed.

The demands of the unconscious then force themselves imperiously on consciousness and bring about a disastrous split which shows itself in one of two ways: either the subject no longer knows what he really wants and nothing interests him, or he wants too much at once and has too many interests, but in impossible things. [“General Description of the Types,” CW 6, par. 573.]

In general, the compensating attitude of the unconscious works to maintain psychic equilibrium.

The unconscious processes that compensate the conscious ego contain all those elements that are necessary for the self-regulation of the psyche as a whole. On the personal level, these are the not consciously recognized personal motives which appear in dreams, or the meanings of daily situations which we have overlooked, or conclusions we have failed to draw, or affects we have not permitted, or criticisms we have spared ourselves. [“The Function of the Unconscious,” CW 7, par. 275.]

In terms of typology, the unconscious manifests through the opposite attitude and the less developed functions. In the extravert, the unconscious has a subjective coloring and an egocentric bias; in the introvert, it can appear as a compulsive tie to persons and things in the outside world. 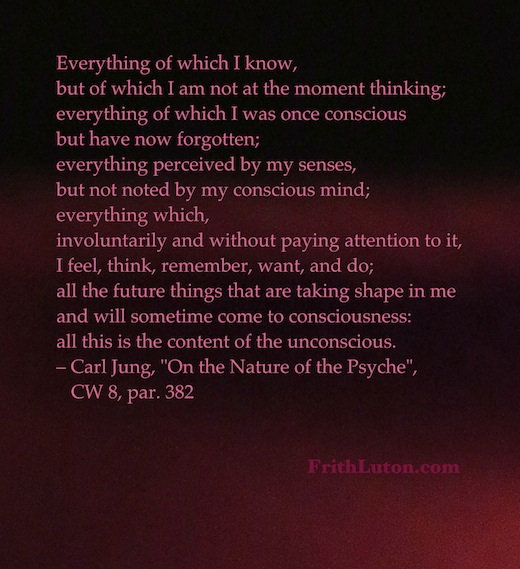 The Creativity of the Unconscious

Jung attributed to the unconscious a creative function, in that it presents to consciousness contents necessary for psychological health. It is not, however, superior to consciousness; its messages (in dreams, impulses, etc.) must always be mediated by the ego.

The unconscious is useless without the human mind. It always seeks its collective purposes and never your individual destiny. [C.G. Jung Letters, vol. 1, p. 283.]

Consciousness should defend its reason and protect itself, and the chaotic life of the unconscious should be given the chance of having its way too – as much of it as we can stand. This means open conflict and open collaboration at once. That, evidently, is the way human life should be. It is the old game of hammer and anvil: between them the patient iron is forged into an indestructible whole, an “individual.” [“Conscious, Unconscious, and Individuation,” CW 9i, par. 522.]

As is often the case when discovering new material, there are related concepts and ideas that add to our understanding. Some of these are in the following related articles:

What is the Collective Unconscious? – a Jungian Perspective

The Development of Personality and its Challenges

Foundational Jungian ideas that have long since entered the mainstream include extrovert and introvert. We have noted in this text that the two types approach situations differently. See also Extraversion and Introversion – the Struggle for Control, the Social Response

It is worth pondering whether some of the protest movements we have seen since the 2000s, and especially against the health restrictions recommended by the top epidemiologists in almost every country in the world during the Covid-19 pandemic, have been led by one or the other type. Or indeed, whether there is a dominant type present in such movements.

To help you further explore this, some helpful articles and pages on this website include:

Working with Jungian Theory and Practice looks at going deeper into Jungian work.