Home » Articles » Individuation and the Ideal of Togetherness

When a person complains that he is always on bad terms with his wife or the people he loves, and that there are terrible scenes or resistances between them, you will see when you analyse this person that he has an attack of hatred. He has been living in participation mystique with those he loves. He has spread himself over other people until he has become identical with them, which is a violation of the principle of individuality. Then they have resistances naturally, in order to keep themselves apart. – Carl Jung, The Psychology of Kundalini Yoga: Notes of the Seminar Given in 1932 by C.G. Jung, p. 7 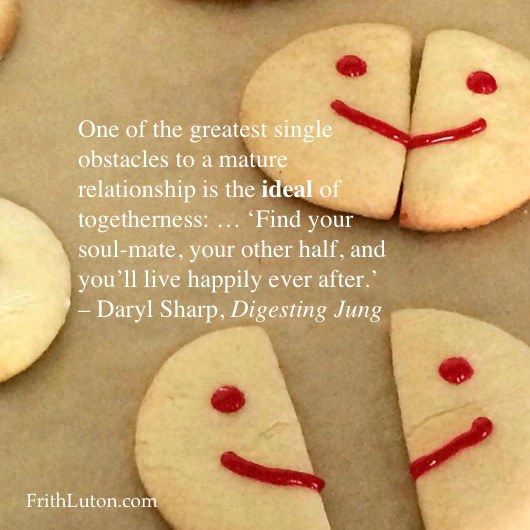 One of the greatest single obstacles to a mature relationship is the ideal of togetherness. It is an ideal based on the archetypal motif of wholeness. Find your soul-mate, your other half, and you’ll live happily ever after. This is a very old idea. You find it in Greek philosophy, for instance in Plato’s Symposium, where Aristophanes pictures humans as originally whole but arrogant. As punishment, Zeus cut them in half, and now, it is said, we forever seek to replace our lost other.

There is nothing intrinsically wrong with this ideal. The mistake is in expecting to find our “lost other” in the outside world. In fact, it is our contra-sexual inner other, animus or anima, who is more properly the object of our search. Outer relationships, already hampered by personal complexes and a multitude of day-to-day concerns, cannot bear the extra weight of archetypal expectations. Although individuation is not possible without relationship, it is not compatible with togetherness.

After the passage quoted above, Jung continues:

I say, “Of course it is most regrettable that you always get into trouble, but don’t you see what you are doing? You love somebody, you identify with them, and of course you prevail against the objects of your love and repress them by your very self-evident identity. You handle them as if they were yourself, and naturally there will be resistances. It is a violation of the individuality of those people, and it is a sin against your own individuality. Those resistances are a most useful and important instinct: you have resistances, scenes, and disappointments so that you may become finally conscious of yourself, and then hatred is no more.”

Individuation, finding your own unique path, requires a focus on the inner axis, ego to unconscious—getting to know yourself. The ideal of togetherness lets you off that hook. Togetherness doesn’t acknowledge the natural boundaries between people, and it gives short shrift to their differences. All you’re left with is unconscious identity. When you are on the path of individuation, focused on your own psychological development, you relate to others from a position of personal integrity. This is the basis for intimacy with distance. It is not as sentimental as togetherness, but it’s not as sticky either.

Togetherness is to intimacy with distance as being in love is to loving. When you’re in love, you absolutely need the other. This is symptomatic of bonding, which is natural between parent and infant, and also at the beginning of any relationship at any age. But need, finally, is not compatible with loving; it only shows the degree to which one lacks personal resources. Better take your need to a therapist than dump it on the one you love. Need in an intimate relationship easily becomes the rationale for power, leading to the fear of loss on one hand, and resentment on the other.

The key to intimacy with distance is the self-containment of each of the partners, which in turn depends on how much they know about themselves. When you are self-contained, psychologically independent, you don’t look to another person for completion. You don’t identify with others and you’re not victimised by their projections. You know where you stand and you live by your personal truth—come what may. You can survive cold shoulders and you can take the heat.

When you are self-contained, you have your own sacred space, your own temenos. You might invite someone in, but you’re not driven to, and you don’t feel abandoned if the invitation is declined. You respect the loved ones’ boundaries, their freedom and privacy, even their secrets; you give them space and you don’t knowingly push their buttons. You don’t judge and you don’t blame. There is interest in, and empathy for, the concerns of others, but you don’t take them on as your own.

The bond between two people is a precious and mysterious thing, not entirely explained by the theory of complexes and the phenomenon of projection. But this much at least is true: there is an optimum distance in every relationship that evolves through trial and error and good will—if you know who you are and can stop pressing for more than you get.