Ego. The central complex in the field of consciousness. (See also self.)

The ego, the subject of consciousness, comes into existence as a complex quantity which is constituted partly by the inherited disposition (character constituents) and partly by unconsciously acquired impressions and their attendant phenomena. [“Analytical Psychology and Education,” CW 17, par. 169.] 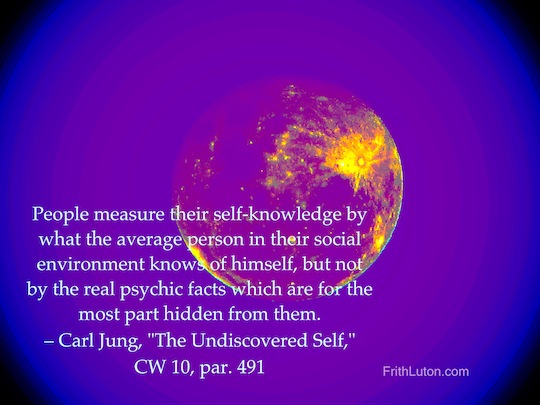 Jung pointed out that knowledge of the ego-personality is often confused with self-understanding.

Anyone who has any ego-consciousness at all takes it for granted that he knows himself. But the ego knows only its own contents, not the unconscious and its contents. People measure their self-knowledge by what the average person in their social environment knows of himself, but not by the real psychic facts which are for the most part hidden from them. In this respect the psyche behaves like the body, of whose physiological and anatomical structure the average person knows very little too. [“The Undiscovered Self,” CW 10, par. 491.]

Individuation Challenge of the Ego

In the process of individuation, one of the initial tasks is to differentiate the ego from the complexes in the personal unconscious, particularly the persona, the shadow and anima/animus. A strong ego can relate objectively to these and other contents of the unconscious without identifying with them.

The ego stands to the self as the moved to the mover, or as object to subject, because the determining factors which radiate out from the self surround the ego on all sides and are therefore supraordinate to it. The self, like the unconscious, is an a priori existent out of which the ego evolves. [“Transformation Symbolism in the Mass,” CW 11, par. 391.]