Home » Articles » The Process of Individuation

Individuation is a process of differentiation, having for its goal the development of the individual personality. – Carl Jung, CW 6, par. 757 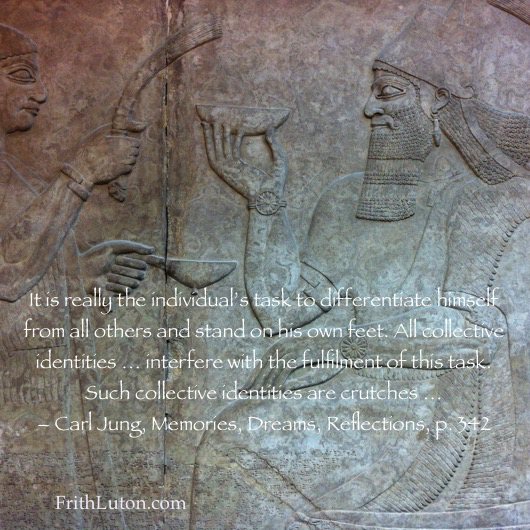 In alchemical writings there is a famous precept known as the Axiom of Maria. It goes like this:

“One becomes two, two becomes three, and out of the third comes the one as the fourth.” – “Introduction to the Religious and Psychological Problems of Alchemy,” Psychology and Alchemy, CW 12, par. 26

Jung saw this dictum as an apt metaphor for the process of individuation, a progressive advance of consciousness in which conflict plays a profoundly important part.

In brief, one stands for the original, paradisiacal state of unconscious wholeness (e.g., childhood); two signifies the loss of innocence occasioned by a conflict between opposites (e.g., persona and shadow); three points to a potential resolution; the third is the transcendent function; and the one as the fourth is psychologically equivalent to a transformed state of conscious wholeness.

Thus simply put, individuation is a kind of circular odyssey, a spiral journey, where the aim is to get back to where you started, but knowing where you’ve been.

The process of individuation, becoming conscious of what is truly unique about oneself, is inextricably tied up with individuality and the development of personality. The first step is to differentiate ourselves from those we have admired and imitated: parents, teachers, mentors of any kind. On top of this, individuality and group identity are incompatible; you can have one or the other, but not both. Jung notes:

It is really the individual’s task to differentiate himself from all others and stand on his own feet. All collective identities, such as membership in organisations, support of “isms,” and so on, interfere with the fulfilment of this task. Such collective identities are crutches for the lame, shields for the timid, beds for the lazy, nurseries for the irresponsible. – Carl Jung, Memories, Dreams, Reflections, p. 342

On the other hand, Jung also made it clear that he was not advising people to become antisocial eccentrics. Always he insisted that one must adapt to both inner and outer reality. We cannot individuate in a corner; we need the mirror provided by other people as well as that of the unconscious. Our task, and no easy one at that, is to sort out the reflections.

Marie-Louise von Franz, who worked closely with Jung for over thirty years, when asked to comment on what Jung meant by individuation, said the following:

Individuation means being yourself, becoming yourself. Nowadays one always uses the cheap word “self-realisation,” but what one really means is ego-realisation. Jung means something quite different. He means the realisation of one’s own predestined development. That does not always suit the ego, but it is what one intrinsically feels could or should be. We are neurotic when we are not what God meant us to be. Basically, that’s what individuation is all about. One lives one’s destiny. Then usually one is more humane, less criminal, less destructive to one’s environment. – Von Franz, “The Geography of the Soul,” interview in In Touch, Summer 1993, p. 12.

Many years ago, when I had nowhere to go but up, my analyst said to me: “Think of what you’ve been, what you are now, and what you could be.” I still find this a useful reflective exercise in terms of orienting myself on the continuum that is my personal journey of individuation.