Home » Articles » What is an Archetype? – Working with Universal Archetypes

Related topics: Symbol and the Symbolic Attitude for Seeking Meaning 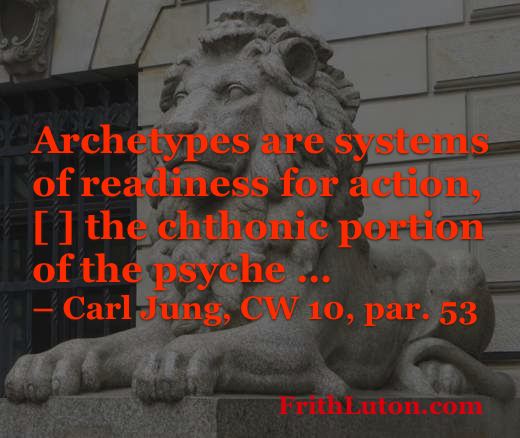 Archetypes are systems of readiness for action, and at the same time images and emotions. They are inherited with the brain structure – indeed they are its psychic aspect. They represent, on the one hand, a very strong instinctive conservatism, while on the other hand they are the most effective means conceivable of instinctive adaptation. And they are thus, essentially, the chthonic portion of the psyche … that portion through which the psyche is attached to nature. [“Mind and Earth,” CW 10, par. 53.]

Archetype – Not Inherited, but Universal

It is not … a question of inherited ideas but of inherited possibilities of ideas. Nor are they individual acquisitions but, in the main, common to all, as can be seen from [their] universal occurrence. [“Concerning the Archetypes and the Anima Concept,” CW 9i, par. 136.]

Archetypes are irrepresentable in themselves but their effects are discernible in archetypal images and motifs.

Archetypes … present themselves as ideas and images, like everything else that becomes a content of consciousness. [“On the Nature of the Psyche,” CW 8, par. 435.]

Archetypes are, by definition, factors and motifs that arrange the psychic elements into certain images, characterized as archetypal, but in such a way that they can be recognized only from the effects they produce. [“A Psychological Approach to the Trinity,” CW 11, par. 222, note 2.]

Jung also described archetypes as “instinctual images,” the forms which the instincts assume. He illustrated this using the simile of the spectrum.

The dynamism of instinct is lodged as it were in the infra-red part of the spectrum, whereas the instinctual image lies in the ultra-violet part. … The realization and assimilation of instinct never take place at the red end, i.e., by absorption into the instinctual sphere, but only through integration of the image which signifies and at the same time evokes the instinct, although in a form quite different from the one we meet on the biological level. [“On the Nature of the Psyche,” CW 8, par. 414.]

Psychologically … the archetype as an image of instinct is a spiritual goal toward which the whole nature of man strives; it is the sea to which all rivers wend their way, the prize which the hero wrests from the fight with the dragon. [Ibid., par. 415.]

Archetypes manifest both on a personal level, through complexes, and collectively, as characteristics of whole cultures. Jung believed it was the task of each age to understand anew their content and their effects.

We can never legitimately cut loose from our archetypal foundations unless we are prepared to pay the price of a neurosis, any more than we can rid ourselves of our body and its organs without committing suicide. If we cannot deny the archetypes or otherwise neutralize them, we are confronted, at every new stage in the differentiation of consciousness to which civilization attains, with the task of finding a new interpretation appropriate to this stage, in order to connect the life of the past that still exists in us with the life of the present, which threatens to slip away from it. [“The Psychology of the Child Archetype,” CW 9i, par. 267.]

The form or representation of an archetype in consciousness. (See also collective unconscious.)

[The archetype is] a dynamism which makes itself felt in the numinosity and fascinating power of the archetypal image. [“On the Nature of the Psyche,” CW 8, par. 414.] 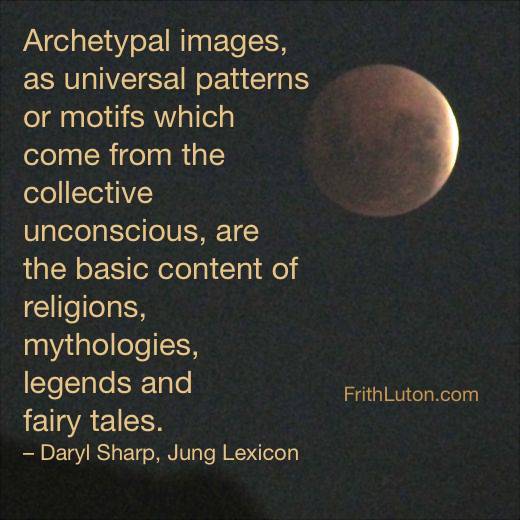 Archetypal images, as universal patterns or motifs which come from the collective unconscious, are the basic content of religions, mythologies, legends and fairy tales.

An archetypal content expresses itself, first and foremost, in metaphors. If such a content should speak of the sun and identify with it the lion, the king, the hoard of gold guarded by the dragon, or the power that makes for the life and health of man, it is neither the one thing nor the other, but the unknown third thing that finds more or less adequate expression in all these similes, yet – to the perpetual vexation of the intellect – remains unknown and not to be fitted into a formula. [“The Psychology of the Child Archetype,” CW 9i, par. 267]

Archetypal Patterns – all Times, all Places

On a personal level, archetypal motifs are patterns of thought or behavior that are common to humanity at all times and in all places.

For years I have been observing and investigating the products of the unconscious in the widest sense of the word, namely dreams, fantasies, visions, and delusions of the insane. I have not been able to avoid recognizing certain regularities, that is, types. There are types of situations and types of figures that repeat themselves frequently and have a corresponding meaning. I therefore employ the term “motif” to designate these repetitions. Thus there are not only typical dreams but typical motifs in dreams. … [These] can be arranged under a series of archetypes, the chief of them being . . . the shadow, the wise old man, the child (including the child hero), the mother (“Primordial Mother” and “Earth Mother”) as a supraordinate personality (“daemonic” because supraordinate), and her counterpart the maiden, and lastly the anima in man and the animus in woman. [“The Psychological Aspects of the Kore,” ibid., par. 309.]

Suggestion on Working with Universal Archetypes

A process of Jungian analysis with a trained Jungian analyst will typically include reference to relevant archetypes or archetypal patterns as they emerge in the process. This is an organic process, and is entirely led by the interaction between the analyst and the analysand, and the psychic material that arises.

Further reading on the Jungian process: Working with Jungian Theory and Practice

Also of interest might be: What is Jungian Analysis?