Persona – The “I,” usually ideal aspects of ourselves, that we present to the outside world.

The persona is … a functional complex that comes into existence for reasons of adaptation or personal convenience. [“Definitions,” CW 6, par. 801.]

The persona is that which in reality one is not, but which oneself as well as others think one is. [“Concerning Rebirth,” CW 9i, par. 221.] 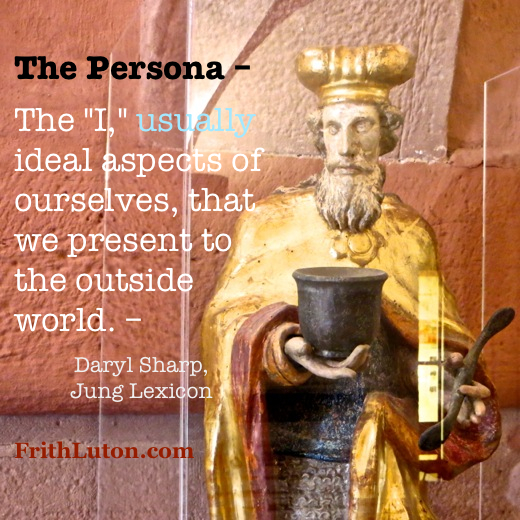 Originally the word persona meant a mask worn by actors to indicate the role they played. On this level, it is both a protective covering and an asset in mixing with other people. Civilized society depends on interactions between people through the persona.

There are indeed people who lack a developed persona … blundering from one social solecism to the next, perfectly harmless and innocent, soulful bores or appealing children, or, if they are women, spectral Cassandras dreaded for their tactlessness, eternally misunderstood, never knowing what they are about, always taking forgiveness for granted, blind to the world, hopeless dreamers. From them we can see how a neglected persona works. [“Anima and Animus,” CW 7, par. 318.]

Before the persona has been differentiated from the ego, the persona is experienced as individuality. In fact, as a social identity on the one hand and an ideal image on the other, there is little individual about it.

When we analyse the persona we strip off the mask, and discover that what seemed to be individual is at bottom collective; in other words, that the persona was only a mask of the collective psyche. Fundamentally the persona is nothing real: it is a compromise between individual and society as to what a man should appear to be. He takes a name, earns a title, exercises a function, he is this or that. In a certain sense all this is real, yet in relation to the essential individuality of the person concerned it is only a secondary reality, a compromise formation, in making which others often have a greater share than he. [“The Persona as a Segment of the Collective Psyche,” ibid., pars. 245f.]

The Trap of a Successful Persona

A psychological understanding of the persona as a function of relationship to the outside world makes it possible to assume and drop one at will. But by rewarding a particular persona, the outside world invites identification with it. Money, respect and power come to those who can perform singlemindedly and well in a social role. From being a useful convenience, therefore, the persona may become a trap and a source of neurosis.

A man cannot get rid of himself in favour of an artificial personality without punishment. Even the attempt to do so brings on, in all ordinary cases, unconscious reactions in the form of bad moods, affects, phobias, obsessive ideas, backsliding vices, etc. The social “strong man” is in his private life often a mere child where his own states of feeling are concerned. [“Anima and Animus,” ibid., par. 307. ]

The demands of propriety and good manners are an added inducement to assume a becoming mask. What goes on behind the mask is then called “private life.” This painfully familiar division of consciousness into two figures, often preposterously different, is an incisive psychological operation that is bound to have repercussions on the unconscious. [Ibid., par. 305.]

Identifying with the Persona

Among the consequences of identifying with a persona are: we lose sight of who we are without a protective covering; our reactions are predetermined by collective expectations (we do and think and feel what our persona “should” do, think and feel); those close to us complain of our emotional distance; and we cannot imagine life without it.

To the extent that ego-consciousness is identified with the persona, the neglected inner life (personified in the shadow and anima or animus) is activated in compensation. The consequences, experienced in symptoms characteristic of neurosis, can stimulate the process of individuation.

There is, after all, something individual in the peculiar choice and delineation of the persona, and … despite the exclusive identity of the ego-consciousness with the persona the unconscious self, one’s real individuality, is always present and makes itself felt indirectly if not directly. Although the ego-consciousness is at first identical with the persona – that compromise role in which we parade before the community – yet the unconscious self can never be repressed to the point of extinction. Its influence is chiefly manifest in the special nature of the contrasting and compensating contents of the unconscious. The purely personal attitude of the conscious mind evokes reactions on the part of the unconscious, and these, together with personal repressions, contain the seeds of individual development. [“The Persona as a Segment of the Collective Psyche,” ibid., par. 247.]

To learn more about me, refer to Jungian Analyst – Melbourne.