Home » Articles » Logos as a Solar, Yang, ‘Masculine’ Concept of Discrimination and Insight

Logos – The principle of logic and structure, traditionally associated with spirit, the father world and the God-image. (See also animus and Eros.)

There is no consciousness without discrimination of opposites. This is the paternal principle, the Logos, which eternally struggles to extricate itself from the primal warmth and primal darkness of the maternal womb; in a word, from unconsciousness. [“Psychological Aspects of the Mother Archetype,” CW 9i, par. 178.] 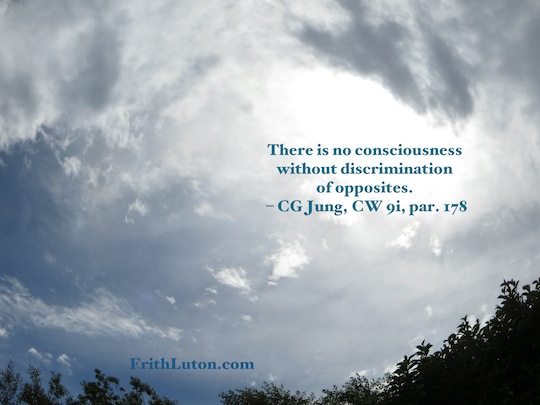 By Logos I meant discrimination, judgment, insight, and by Eros I meant the capacity to relate. I regarded both concepts as intuitive ideas which cannot be defined accurately or exhaustively. From the scientific point of view this is regrettable, but from a practical one it has its value, since the two concepts mark out a field of experience which it is equally difficult to define.

As we can hardly ever make a psychological proposition without immediately having to reverse it, instances to the contrary leap to the eye at once: men who care nothing for discrimination, judgment, and insight, and women who display an almost excessively masculine proficiency in this respect. … Wherever this exists, we find a forcible intrusion of the unconscious, a corresponding exclusion of the consciousness specific to either sex, predominance of the shadow and of contrasexuality. [“The Personification of the Opposites,” CW 14, pars. 224f.]

In his later writing on alchemy, Jung described Logos and Eros as psychologically equivalent to solar and lunar consciousness, archetypal ideas analogous to the Eastern concepts of yang and yin – different qualities of energy. This did not change his view that Eros was more “specific” to feminine consciousness and Logos to masculine. Hence he attributed Eros in a man to the influence of the anima, and Logos in a woman to that of the animus.

In a man it is the lunar anima, in a woman the solar animus, that influences consciousness in the highest degree. Even if a man is often unaware of his own anima-possession, he has, understandably enough, all the more vivid an impression of the animus-possession of his wife, and vice versa. [Ibid.,  par. 225.]

To learn more about me, refer to Jungian Analyst – Melbourne.