Soul-image. The representation, in dreams or other products of the unconscious, of the inner personality, usually contrasexual. (See also anima and animus.) 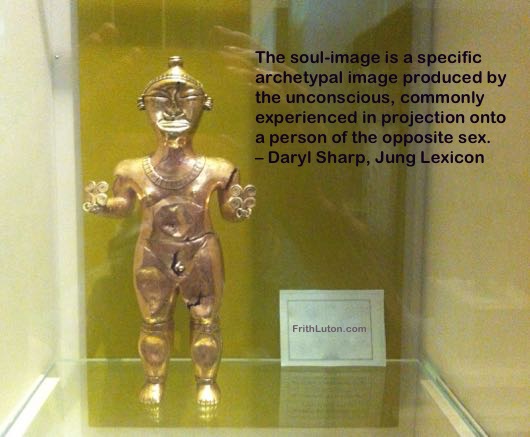 Wherever an impassioned, almost magical, relationship exists between the sexes, it is invariably a question of a projected soul-image. Since these relationships are very common, the soul must be unconscious just as frequently. [“Definitions,” CW 6, par. 809. ]

The soul-image is a specific archetypal image produced by the unconscious, commonly experienced in projection onto a person of the opposite sex.

For an idealistic woman, a depraved man is often the bearer of the soul- image; hence the “saviour-fantasy” so frequent in such cases. The same thing happens with men, when the prostitute is surrounded with the halo of a soul crying for succour. [Ibid., par. 811.]

Where consciousness itself is identified with the soul, the soul-image is more likely to be an aspect of the persona.

In that event, the persona, being unconscious, will be projected on a person of the same sex, thus providing a foundation for many cases of open or latent homosexuality, and of father-transferences in men or mother-transferences in women. In such cases there is always a defective adaptation to external reality and a lack of relatedness, because identification with the soul produces an attitude predominantly oriented to the perception of inner processes. [Ibid., par. 809.]

Many relationships begin and initially thrive on the basis of projected soul-images. Inherently symbiotic, they often end badly.