Consciousness. The function or activity which maintains the relation of psychic contents to the ego; distinguished conceptually from the psyche, which encompasses both consciousness and the unconscious. (See also opposites.)

There is no consciousness without discrimination of opposites. [“Psychological Aspects of the Mother Archetype,” CW 9i, par. 178.]

There are two distinct ways in which consciousness arises. The one is a moment of high emotional tension, comparable to the scene in Parsifal where the hero, at the very moment of greatest temptation, suddenly realizes the meaning of Amfortas’ wound. The other is a state of contemplation, in which ideas pass before the mind like dream-images. Suddenly there is a flash of association between two apparently disconnected and widely separated ideas, and this has the effect of releasing a latent tension. Such a moment often works like a revelation. In every case it seems to be the discharge of energy-tension, whether external or internal, which produces consciousness. [“Analytical Psychology and Education,” CW 17, par. 207.] 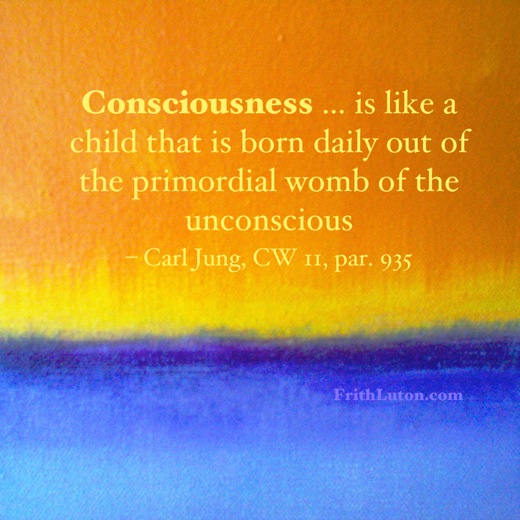 In Jung’s view of the psyche, individual consciousness is a superstructure based on, and arising out of, the unconscious.

Consciousness does not create itself – it wells up from unknown depths. In childhood it awakens gradually, and all through life it wakes each morning out of the depths of sleep from an unconscious condition. It is like a child that is born daily out of the primordial womb of the unconscious. … It is not only influenced by the unconscious but continually emerges out of it in the form of numberless spontaneous ideas and sudden flashes of thought. [“The Psychology of Eastern Meditation,” CW 11, par. 935.]