Home » Articles » The Development of Personality and its Challenges

“The development of personality … is at once a charisma and a curse, because its first fruit is the segregation of the single individual from the undifferentiated and unconscious herd. This means isolation, and there is no more comforting word for it. Neither family nor society nor position can save one from this fate, nor yet the most successful adaptation to the environment.” – Carl Jung, CW 17, pars. 293f

Being alone is relatively easy for introverts. They may lack a vital, on-going connection with the outer world but they generally have an active inner life. Extraverts are used to hustle and bustle and find it more difficult to live with just themselves. But whatever one’s typology, the great challenge in the development of personality is to find a personal centre. 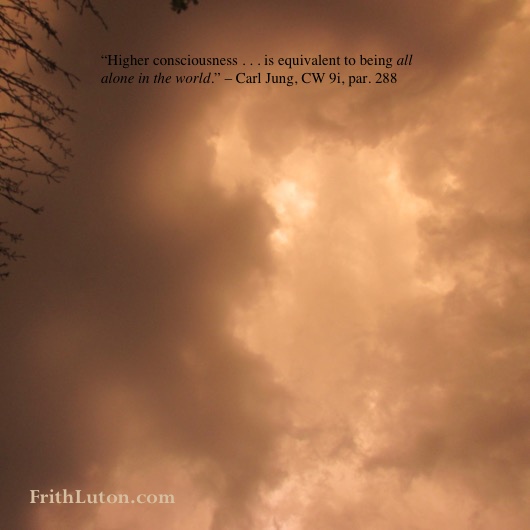 Initially one’s centre is projected onto the immediate family, a self-contained unit experienced as wholeness. Without a family, whether nurturing or repressive, we are apt to feel rootless, at loose ends. The loss of such a container is clearly at work behind the emotional distress of orphans or a child whose parents split up, but that same motif is also constellated in adults when one ascribes to values other than those sanctioned by the collective, or when any close relationship breaks up.

Loneliness feels like one has been abandoned. Mythologically, abandonment is associated with the childhood experience of gods and divine heroes—Zeus, Dionysus, Poseidon, Moses, Romulus and Remus, and so on. In fact, the motif is so widespread that Jung describes abandonment as “a necessary condition and not just a concomitant symptom,” of the potentially higher consciousness symbolised by images of the child in a person’s dreams. [“The Psychology of the Child Archetype,” CW 9i, par. 287]

Anyone in the process of becoming independent must detach from his or her origins: mother, family, society. Sometimes this transition happens smoothly. If it does not, the result is twofold: the ‘poor me’ syndrome, characteristic of the regressive longing for dependence, and a psychic experience of a potentially creative nature—the positive side of the divine child archetype: new life, exciting new possibilities. The incompatibility between these two directions generates a conflict that may precipitate a psychological crisis. The conflict is the price that has to be paid in order to grow up. On the one hand, we long to return to the past; on the other, we are drawn inexorably toward an unknown future.

Initially, this conflict goes hand in hand with the feeling of loneliness, behind which is the archetypal motif of the abandoned child. Thus Jung observes, “Higher consciousness . . . is equivalent to being all alone in the world.” [Ibid., par. 288]  In short, individuation and personality are gifts that are paid for dearly.

The antidote to the feeling of loneliness, of abandonment, is the development of personality. But this does not happen unless one chooses his or her own way consciously and with moral deliberation. And you can make a commitment to go your own way only if you believe that way to be better for you than conventional ways of a moral, social, political or religious nature—any of the well-known ‘isms.’ Those who adhere to them do not choose their own way; they develop not themselves but a method and a collective mode of life at the cost of their own wholeness.

Personality is not the prerogative of genius, nor is mental prowess a significant factor in individuation. Just as in fairy tales, where so many psychic patterns are illustrated, the one who finds the treasure “hard to attain” is as often as not a Dummling, an innocent fool who simply follows his instincts.