Home » Articles » Introversion – the Struggle for Control, the Social Response

Introversion – A mode of psychological orientation where the movement of energy is toward the inner world. (Compare extraversion.)

Everyone whose attitude is introverted thinks, feels, and acts in a way that clearly demonstrates that the subject is the prime motivating factor and that the object is of secondary importance. [“Definitions,” CW 6, par. 769.]

Always he has to prove that everything he does rests on his own decisions and convictions, and never because he is influenced by anyone, or desires to please or conciliate some person or opinion. [“Psychological Types,” CW 6, par. 893.] 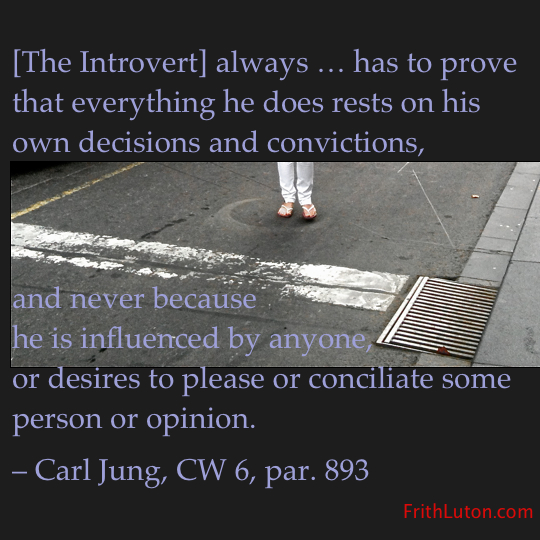 An introverted consciousness can be well aware of external conditions, but is not motivated by them. The extreme introvert responds primarily to internal impressions.

In a large gathering he feels lonely and lost. The more crowded it is, the greater becomes his resistance. He is not in the least “with it,” and has no love of enthusiastic get-togethers. He is not a good mixer. What he does, he does in his own way, barricading himself against influences from outside. … Under normal conditions he is pessimistic and worried, because the world and human beings are not in the least good but crush him. … His own world is a safe harbour, a carefully tended and walled-in garden, closed to the public and hidden from prying eyes. His own company is the best. [“Psychological Typology,” ibid., pars. 976f.]

Signs of introversion in a child are a reflective, thoughtful manner and resistance to outside influences.

The child wants his own way, and under no circumstances will he submit to an alien rule he cannot understand. When he asks questions, it is not from curiosity or a desire to create a sensation, but because he wants names, meanings, explanations to give him subjective protection against the object. [“Psychological Types,” ibid., par. 897.]

The introverted attitude tends to devalue things and other persons, to deny their importance. Hence, by way of compensation, extreme introversion leads to an unconscious reinforcement of the object’s influence. This makes itself felt as a tie, with concomitant emotional reactions, to outer circumstances or another person.

The individual’s freedom of mind is fettered by the ignominy of his financial dependence, his freedom of action trembles in the face of public opinion, his moral superiority collapses in a morass of inferior relationships, and his desire to dominate ends in a pitiful craving to be loved. It is now the unconscious that takes care of the relation to the object, and it does so in a way that is calculated to bring the illusion of power and the fantasy of superiority to utter ruin. [“General Description of the Types,” ibid., par. 626.]

The Struggle for Control

A person in this situation can be worn out from fruitless attempts to impose his or her will.

These efforts are constantly being frustrated by the overwhelming impressions received from the object. It continually imposes itself on him against his will, it arouses in him the most disagreeable and intractable affects and persecutes him at every step. A tremendous inner struggle is needed all the time in order to “keep going”. The typical form his neurosis takes is psychasthenia, a malady characterized on the one hand by extreme sensitivity and on the other by great proneness to exhaustion and chronic fatigue. [Ibid.]

In less extreme cases, introverts are simply more conservative than not, preferring the familiar surroundings of home and intimate times with a few close friends; they husband their energy and would rather stay put than go from place to place. Their best work is done on their own resources, on their own initiative and in their own way.

His retreat into himself is not a final renunciation of the world, but a search for quietude, where alone it is possible for him to make his contribution to the life of the community. [“Psychological Typology,” ibid., par. 979.]

In recent years, some valuable books have been published on the topic of the Introvert. However, this page looks at this from a Jungian perspective to help us understand what Jung meant by Introversion and some of its psychological implications.

In a Jungian analysis process, Introversion is one of many factors that come to life as we work with the symbols that emerge in your dreams.

Working with Jungian Theory and Practice looks at some deeper aspects of Jungian analysis.