Home » Articles » The Self in Jungian Work

“Only what is really oneself has the power to heal.” – Carl Jung, Two Essays on Analytic Psychology, CW 7, par. 258 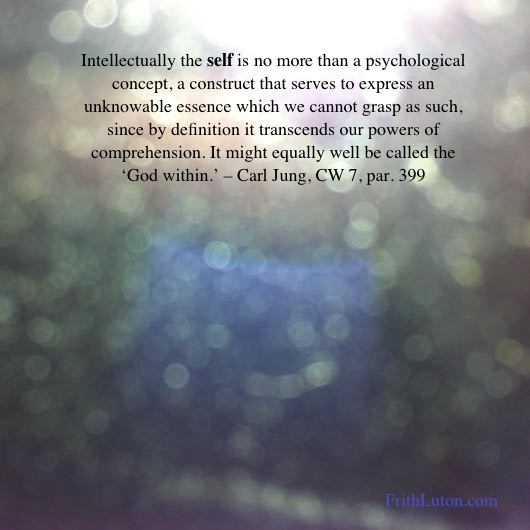 If I were asked to choose one remark of Jung’s that informs my attitude as an analyst, that would be it. The whole process is there, including the idea that neurosis is an attempt at self-cure. And what is really oneself can only be discovered through holding the tension between the opposites until the ‘third’—something not logically given—manifests. How this third, the so-called transcendent function, makes itself known depends on individual psychology and circumstances. But in Jung’s model it always represents the creative intervention and guidance of the Self, the archetype of wholeness, which functions as the regulating centre of the psyche.

In plainer words, the Self is a transpersonal power that is beyond the control of the ego. It can be experienced, but not easily defined. In fact, there is no difference between the Self as an experiential, psychological reality and the religious concept of a supreme being, except that the traditional idea of God places Him somewhere ‘out there.’ In Jung’s model of the psyche, the Self is inside.

Some significant comments by Jung on the Self:

Intellectually the self is no more than a psychological concept, a construct that serves to express an unknowable essence which we cannot grasp as such, since by definition it transcends our powers of comprehension. It might equally well be called the ‘God within.’ – CW 7, par. 399. (Note that Jung did not capitalise the word ‘self,’ but in modern Jungian writing it is conventional to do so in order to differentiate the Self as archetype from the ego-self.)

Sensing the self as something irrational, as an indefinable existent, to which the ego is neither opposed nor subjected, but merely attached, and about which it revolves very much as the earth revolves round the sun—thus we come to the goal of individuation. – CW 7, par. 405

So long as the self is unconscious, it corresponds to Freud’s super-ego and is a source of perpetual moral conflict. If, however, it is withdrawn from projection and is no longer identical with public opinion, then one is truly one’s own yea and nay. The self then functions as a union of opposites and thus constitutes the most immediate experience of the Divine which it is psychologically possible to imagine. – ‘Transformation Symbolism in the Mass,’ Psychology and Religion, CW 11, par. 396

Like any archetype, the essential nature of the Self is unknown and possibly unknowable, but its many and various manifestations—archetypal images—are known to us, in one form or another, as the content of dreams, myth and legend. Jung says it all:

The self appears in dreams, myths, and fairytales in the figure of the ‘supraordinate personality,’ such as a king, hero, prophet, saviour, etc., or in the form of a totality symbol, such as the circle, square, quadratura circuli, cross, etc. When it represents a complexio oppositorum, a union of opposites, it can also appear as a united duality, in the form, for instance, of tao as the interplay of yang and yin, or of the hostile brothers, or of the hero and his adversary (arch-enemy, dragon), Faust and Mephistopheles, etc. Empirically, therefore, the self appears as a play of light and shadow, although conceived as a totality and unity in which the opposites are united. – ‘Definitions,’ Psychological Types, CW 6, par. 790

Psychologically, uniting the opposites involves first recognising them in whatever conflict we are engaged in, and then holding the tension between them. The extent to which we are successful in this difficult and often lengthy endeavour—the degree of wholeness we experience—can be called a manifestation of the Self, or, if one prefers, the grace of God.