Psyche. The totality of all psychological processes, both conscious and unconscious.

The psyche is far from being a homogenous unit – on the contrary, it is a boiling cauldron of contradictory impulses, inhibitions, and affects, and for many people the conflict between them is so insupportable that they even wish for the deliverance preached by theologians. [“Psychological Aspects of the Mother Archetype,” CW 9i, par. 190.] 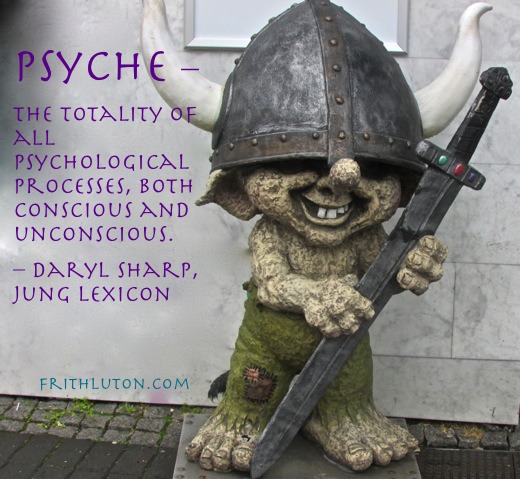 The way in which the psyche manifests is a complicated interplay of many factors, including an individual’s age, sex, hereditary disposition, psychological type and attitude, and degree of conscious control over the instincts.

Psychic processes … behave like a scale along which consciousness “slides.” At one moment it finds itself in the vicinity of instinct, and falls under its influence; at another, it slides along to the other end where spirit predominates and even assimilates the instinctual processes most opposed to it. [“On the Nature of the Psyche,” CW 8, par. 408.]

The tremendous complexity of psychic phenomena led Jung to the belief that attempts to formulate a comprehensive theory of the psyche were doomed to failure.

The premises are always far too simple. The psyche is the starting-point of all human experience, and all the knowledge we have gained eventually leads back to it. The psyche is the beginning and end of all cognition. It is not only the object of its science, but the subject also. This gives psychology a unique place among all the other sciences: on the one hand there is a constant doubt as to the possibility of its being a science at all, while on the other hand psychology acquires the right to state a theoretical problem the solution of which will be one of the most difficult tasks for a future philosophy. [“Psychological Factors in Human Behaviour,” ibid., par. 261.]