Progression. The daily advance of the process of psychological adaptation, the opposite of regression. (See also neurosis.) 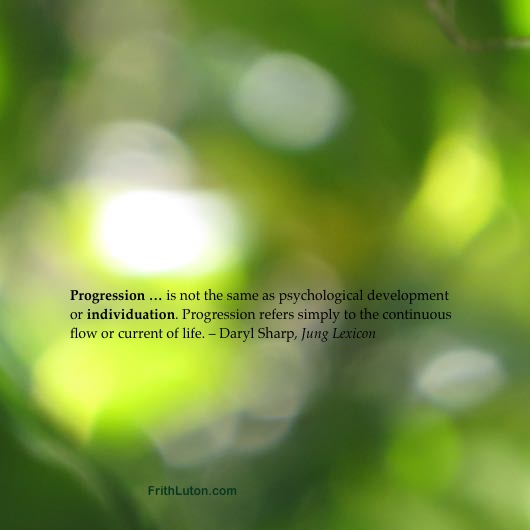 Progression is a forwards movement of life in the same sense that time moves forwards. This movement can occur in two different forms: either extraverted, when the progression is predominantly influenced by objects and environmental conditions, or introverted, when it has to adapt itself to the conditions of the ego (or, more accurately, of the “subjective factor”). Similarly, regression can proceed along two lines: either as a retreat from the outside world (introversion), or as a flight into extravagant experience of the outside world (extraversion). Failure in the first case drives a man into a state of dull brooding, and in the second case into leading the life of a wastrel. [“On Psychic Energy,” CW8, par. 77.]

In the normal course of life, there is a relatively easy progression of libido; energy may be directed more or less at will. This is not the same as psychological development or individuation. Progression refers simply to the continuous flow or current of life. It is commonly interrupted by a conflict or the inability to adapt to changing circumstances.

During the progression of libido the pairs of opposites are united in the co-ordinated flow of psychic processes. … But in the stoppage of libido that occurs when progression has become impossible, positive and negative can no longer unite in co-ordinated action, because both have attained an equal value which keeps the scales balanced. [Ibid., par. 61.]

The struggle between the opposites would continue unabated if the process of regression, the backward movement of libido, did not set in, its purpose being to compensate the conscious attitude.

Through their collision the opposites are gradually deprived of value and depotentiated. … In proportion to the decrease in value of the conscious opposites there is an increase in value of all those psychic processes which are not concerned with outward adaptation and therefore are seldom or never employed consciously. [“On Psychic Energy,” ibid., par. 62.]

As the energic value of these previously unconscious psychic processes increases, they manifest indirectly as disturbances of conscious behavior and symptoms characteristic of neurosis. Prominent aspects of the psyche one then needs to become aware of are the persona, the contrasexual complex (anima/animus) and the shadow.