You are here: Home / Articles / Final

Final. A point of view based on the potential result or purpose of psychic activity, complementary to a causal approach. (See also constructive, neurosis, reductive, and self-regulation of the psyche.) 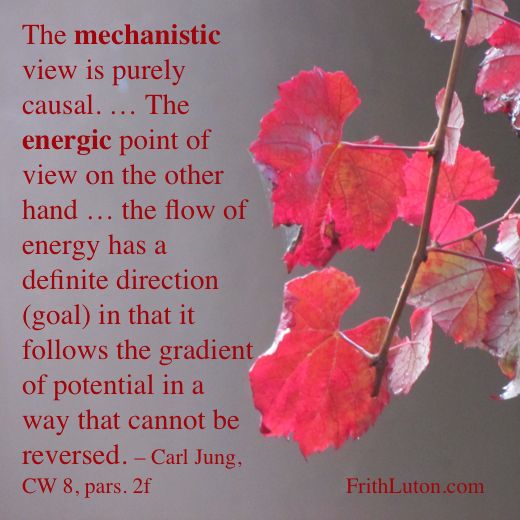 Psychological data necessitate a twofold point of view, namely that of causality and that of finality. I use the word finality intentionally, in order to avoid confusion with the concept of teleology. [Teleology implies the anticipation of a particular end or goal; finality assumes purpose but an essentially unknown goal.] By finality I mean merely the immanent psychological striving for a goal. Instead of “striving for a goal” one could also say “sense of purpose.” All psychological phenomena have some such sense of purpose inherent in them, even merely reactive phenomena like emotional reactions. [“General Aspects of Dream Psychology,” CW 8, par. 456.]

Jung also called the final point of view energic, contrasting it with mechanistic or reductive.

The mechanistic view is purely causal; it conceives an event as the effect of a cause, in the sense that unchanging substances change their relations to one another according to fixed laws. The energic point of view on the other hand is in essence final; the event is traced back from effect to cause on the assumption that some kind of energy underlies the changes in phenomena, that it maintains itself as a constant throughout these changes and finally leads to entropy, a condition of general equilibrium. The flow of energy has a definite direction (goal) in that it follows the gradient of potential in a way that cannot be reversed. [“On Psychic Energy,” ibid., pars. 2f.]

Jung believed that laws governing the physical conservation of energy applied equally to the psyche. Psychologically, this means that where there is an overabundance of energy in one place, some other psychic function has been deprived; conversely, when libido “disappears,” as it seems to do in a depression, it must appear in another form, for instance as a symptom.

Every time we come across a person who has a “bee in his bonnet,” or a morbid conviction, or some extreme attitude, we know that there is too much libido, and that the excess must have been taken from somewhere else where, consequently, there is too little. … Thus the symptoms of a neurosis must be regarded as exaggerated functions over-invested with libido. … The question has to be reversed in the case of those syndromes characterized mainly by lack of libido, for instance apathetic states. Here we have to ask, where did the libido go? … The libido is there, but it is not visible and is inaccessible to the patient himself. … It is the task of psychoanalysis to search out that hidden place where the libido dwells. [“The Theory of Psychoanalysis,” CW 4, pars. 254f]

The energic or final point of view, coupled with the concept of compensation, led Jung to believe that an outbreak of neurosis is essentially an attempt by the psyche to cure itself.