Among all my patients in the second half of life—that is to say, over thirty-five—there has not been one whose problem in the last resort was not that of finding a religious outlook on life. – Carl Jung, CW 11, par. 509

There are those who misunderstand Jungian psychology to be a religion, and for that reason either worship it as a fount of knowledge or decry it as the devil’s own work. Jung himself denied that his school of analytical psychology was a religious movement:

I am speaking just as a philosopher. People sometimes call me a religious leader. I am not that. I have no messages, no mission. I attempt only to understand. We are philosophers in the old sense of the word, lovers of wisdom. That avoids the sometimes questionable company of those who offer a religion. [C.G. Jung Speaking, p. 98] 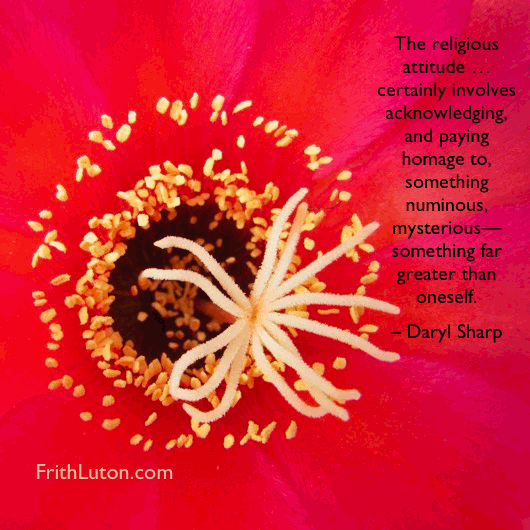 On the other hand, Jung did believe that the human longing for consciousness is essentially a religious activity. For instance, in an essay identifying five prominent instincts—creativity, reflection, activity, sexuality and hunger—he included the religious urge as a subset of reflection. [CW 8, pars. 235ff]

Jung was a Swiss Protestant pastor’s son who decried his father’s mindless faith. [Memories, Dreams, Reflections, pp. 92ff] He stressed that when he spoke of religion, or ‘the religious urge,’ he was not referring to belief in a particular creed or membership of a church, but rather to a certain attitude of mind. He described this attitude in terms of the Latin word religio, from relegere, meaning a careful consideration and observation of irrational factors historically conceived as spirits, demons, gods, goblins and horrors under the bed—“the attitude peculiar to a consciousness which has been changed by experience of the numinosum” [CW 11, par. 9]—which is to say, the unknown.

Thus someone in a conflict situation, he said, has to rely on

divine comfort and mediation … an autonomous psychic happening, a hush that follows the storm, a reconciling light in the darkness … secretly bringing order into the chaos of his soul. [CW 11, par. 260]

Although Jung often used the word ‘soul’ in its traditional theological sense, he strictly limited its psychological meaning. “By soul,” he writes, “I understand a clearly demarcated functional complex that can best be described as ‘personality.’ ” [CW 6, par. 797] Thus soul-making, in this secular sense, can be seen as a natural consequence of differentiating and assimilating previously unconscious contents, particularly shadow and anima/animus.

Personally, I experience soul when I stare at the wall in the still of the night. Soul is there when I am in conflict with myself, when I struggle for answers. Soul is what I am, as opposed to what I seem to be. Soul is forged in the interactions between me and my inner complexes (persona, shadow, anima, etc.), between me and my outer companions (friends, family, colleagues), and I see abundant evidence of it daily in my analytic practice.

At times of transition from one stage of life to another, traditional religious imagery often appears in dreams. A childless woman in her forties dreams of baptising her new-born. A man in his fifties dreams of finding a long-lost baby boy under a pile of rubble in the basement of a church. People dream of being priests or nuns, of celebrating Mass, of pilgrimages, of mountainous journeys, fearful descents into black holes, wandering in the desert. A shopping mall becomes a mosque. Shrines magically appear in parking lots. Virgin births and divine children— born walking and speaking—are not rare.

The particular significance of such images is inextricably bound up with the dreamer’s personal history and associations, but beyond that they seem to derive from a common bedrock, the archetypal basis for all mythology and all religion—the search for meaning. Hence Jung writes that a neurosis “must be understood, ultimately, as the suffering of a soul which has not discovered its meaning.” [CW 11, par. 497]

Marie-Louise von Franz notes that Jung realised early in his life that institutionalised religion could give him no answers. Instead, he found the way to illumination in the depths of himself; thus:

The basis and substance of Jung’s entire life and work do not lie in the traditions and religions which have become contents of collective consciousness, but rather in that primordial experience which is the source of these contents: the encounter of the single individual with his own god or daimon, his struggle with the emotions, affects, fantasies and creative inspirations and obstacles which come to light from within. [C.G. Jung: His Myth in Our Time, pp. 13f]

The religious attitude can hardly be pinned down in a sentence or two, but it certainly involves acknowledging, and paying homage to, something numinous, mysterious—something far greater than oneself. God? Nature? The Self? Take your pick.

Jung says of his message that it sounds like religion, but is not. He claims to be speaking as a philosopher, whereas on other occasions he rejected even that designation, preferring to be considered an empirical scientist. Consistently he rejected the idea that he was a religious leader—understandable in view of the usual fate of founders of new religions (like Christ): dismemberment and early death.

Jung’s protestations notwithstanding, his psychology can be considered a kind of religion; not a traditional religion with an emphasis on dogma, faith and ritual, to be sure, but a new kind—a religion of experience. [Liberating the Heart: Spirituality and Jungian Psychology, p. 19]

Well, I can live with that, for when all is said and done, what is the wellspring of religion if not humanity’s age-old experience of the gods? Nowadays we may call them archetypes or complexes, but we might as well call them turnips. By any name they will always be essentially unknown. Jungian psychology locates these ‘gods’ inside instead of out, but the alchemists saw little difference, according to this ancient Hermetic ditty quoted more than once by Jung himself:

Heaven above, Heaven below.

Stars above, Stars below.

All that is above Also is below.

Grasp this And rejoice.

[See, for instance, “The Psychology of the Transference,” The Practice of Psychotherapy, CW 16, par. 384]