Unconsciousness. A state of psychic functioning marked by lack of control over the instincts and identification with complexes.

Unconsciousness is the primal sin, evil itself, for the Logos. [“Psychological Aspects of the Mother Archetype,” ibid., par. 178.] 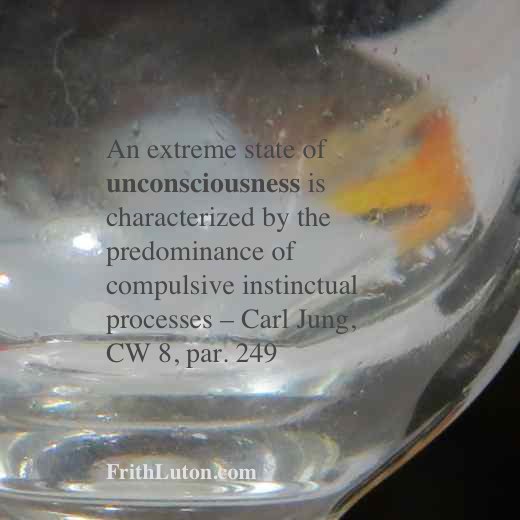 An extreme state of unconsciousness is characterized by the predominance of compulsive instinctual processes, the result of which is either uncontrolled inhibition or a lack of inhibition throughout. The happenings within the psyche are then contradictory and proceed in terms of alternating, non-logical antitheses. In such a case the level of consciousness is essentially that of a dream-state. A high degree of consciousness, on the other hand, is characterized by a heightened awareness, a preponderance of will, directed, rational behaviour, and an almost total absence of instinctual determinants. The unconscious is then found to be at a definitely animal level. The first state is lacking in intellectual and ethical achievement, the second lacks naturalness. [“Psychological Factors in Human Behaviour,” CW 8, par. 249.]

The greatest danger about unconsciousness is proneness to suggestion. The effect of suggestion is due to the release of an unconscious dynamic, and the more unconscious this is, the more effective it will be. Hence the ever-widening split between conscious and unconscious increases the danger of psychic infection and mass psychosis. [“The Structure and Dynamics of the Self,” CW 9ii, par. 390.]