All psychic processes whose energies are not under conscious control are instinctive. [“Definitions,” CW 6, par. 765.] 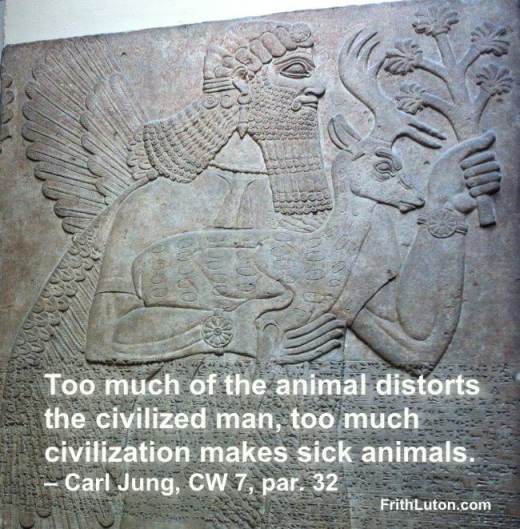 Instinct is not an isolated thing, nor can it be isolated in practice. It always brings in its train archetypal contents of a spiritual nature, which are at once its foundation and its limitation. In other words, an instinct is always and inevitably coupled with something like a philosophy of life, however archaic, unclear, and hazy this may be. Instinct stimulates thought, and if a man does not think of his own free will, then you get compulsive thinking, for the two poles of the psyche, the physiological and the mental, are indissolubly connected. [“Psychotherapy and a Philosophy of Life,” CW 16, par. 185.]

Psychic processes which ordinarily are consciously controlled can become instinctive when imbued with unconscious energy. This is liable to occur when the level of consciousness is low, due to fatigue, intoxication, depression, etc. Conversely, instincts can be modified according to the extent that they are civilized and under conscious control, a process Jung called psychization.

An instinct which has undergone too much psychization can take its revenge in the form of an autonomous complex. This is one of the chief causes of neurosis. [“Psychological Factors in Human Behaviour,” CW 8, par. 255.]

Too much of the animal distorts the civilized man, too much civilization makes sick animals. [“The Eros Theory,” CW 7, par. 32.]

Jung identified five prominent groups of instinctive factors: creativity, reflection, activity, sexuality and hunger. Hunger is a primary instinct of self-preservation, perhaps the most fundamental of all drives. Sexuality is a close second, particularly prone to psychization, which makes it possible to divert its purely biological energy into other channels. The urge to activity manifests in travel, love of change, restlessness and play. Under reflection, Jung included the religious urge and the search for meaning. Creativity was for Jung in a class by itself. His descriptions of it refer specifically to the impulse to create art.

Though we cannot classify it with a high degree of accuracy, the creative instinct is something that deserves special mention. I do not know if “instinct” is the correct word. We use the term “creative instinct” because this factor behaves at least dynamically, like an instinct. Like instinct it is compulsive, but it is not common, and it is not a fixed and invariably inherited organization. Therefore I prefer to designate the creative impulse as a psychic factor similar in nature to instinct, having indeed a very close connection with the instincts, but without being identical with any one of them. Its connections with sexuality are a much discussed problem and, furthermore, it has much in common with the drive to activity and the reflective instinct. But it can also suppress them, or make them serve it to the point of the self-destruction of the individual. Creation is as much destruction as construction. [“Psychological Factors in Human Behaviour,” CW 8, par. 245.]

Jung also believed that true creativity could only be enhanced by the analytic process.

Creative power is mightier than its possessor. If it is not so, then it is a feeble thing, and given favourable conditions will nourish an endearing talent, but no more. If, on the other hand, it is a neurosis, it often takes only a word or a look for the illusion to go up in smoke. … Disease has never yet fostered creative work; on the contrary, it is the most formidable obstacle to creation. No breaking down of repressions can ever destroy true creativeness, just as no analysis can ever exhaust the unconscious. [“Analytical Psychology and Education,” CW 17, par. 206.]

Instinct and archetype are a pair of opposites, inextricably linked and therefore often difficult to tell apart.

Psychic processes seem to be balances of energy flowing between spirit and instinct, though the question of whether a process is to be described as spiritual or as instinctual remains shrouded in darkness. Such evaluation or interpretation depends entirely upon the standpoint or state of the conscious mind. [“On the Nature of the Psyche,” CW 8, par. 407.]

When consciousness become overspiritualized, straying too far from its instinctual foundation, self-regulating processes within the psyche become active in an attempt to correct the balance. This is often signaled in dreams by animal symbols, particularly snakes.

The snake is the representative of the world of instinct, especially of those vital processes which are psychologically the least accessible of all. Snake dreams always indicate a discrepancy between the attitude of the conscious mind and instinct, the snake being a personification of the threatening aspect of that conflict. [“The Sacrifice,” CW 5, par. 615.]