Home » Articles » Rediscovering the Anima and its Development

Before we consider a man’s anima development stages, let us consider Jung’s use of the term ‘anima’.

The anima is the archetype of life itself. – Carl Jung, The Archetypes and the Collective Unconscious, CW 9i, par. 66

Psychologically a man’s inner woman, his anima, functions as his soul. When a man is full of life we say he is “animated.” The man with no connection to his feminine side feels dull and listless. Nowadays we call this depression, but the experience is not new. For thousands of years, among so-called primitive peoples, it has been known as loss of soul. 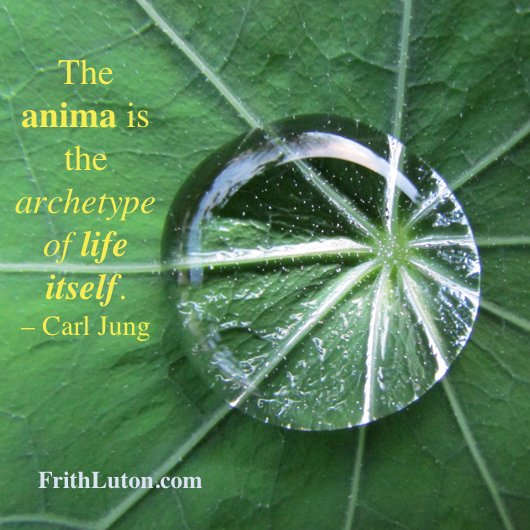 A man’s inner image of woman is initially determined by his experience of his personal mother or closest female caregiver. It is later modified through contact with other women—friends, relatives, teachers—but the experience of the personal mother is so powerful and long-lasting that a man is naturally attracted to those women who are much like her—or, as often happens, women quite unlike her. That is to say, he may yearn for what he’s known, or seek to escape it at all costs.

A man who is unconscious of his feminine side is apt to see that aspect of himself, whatever its characteristics may be, in an actual woman. This happens via projection and is commonly experienced as falling in love or, conversely, as intense dislike. A man may also project his anima onto another man, in love or hate, though in practice this is often difficult to distinguish from the projection of the man’s shadow.

A man unrelated to his inner woman tends to be moody, sometimes gentle and sentimental but prone to sudden rage and violence. Analysts call this being anima-possessed. By paying attention to his moods and emotional reactions—objectifying and personifying them—a man can come into possession of his soul rather than be possessed by it. As with any complex, the negative influence of the anima is reduced by establishing a conscious relationship with it.

Four Stages of the Anima

Jung distinguished four broad stages of the anima in the course of a man’s psychological development. He personified these, in accord with classical stages of eroticism, as Eve, Helen, Mary and Sophia.

In the first stage, Eve, the man’s anima is completely tied up with the mother—not necessarily his personal mother, but the archetypal image of woman as faithful provider of nourishment, security and love—or, indeed, the opposite. The man with an anima of this type cannot function well without a vital connection to a woman and is easy prey to being controlled by her. He frequently suffers impotence or has no sexual desire at all.

In the second stage, personified in the historical figure of Helen of Troy, the anima is a collective sexual image. She is Marlene Dietrich, Marilyn Monroe, Tina Turner, Madonna, all rolled up into one. The man under her spell is often a Don Juan who engages in repeated sexual adventures. These will invariably be short-lived, for two reasons: 1) he has a fickle heart—his feelings are whimsical and often gone in the morning—and 2) no real woman can live up to the expectations that go with this unconscious, ideal image.

The third stage of anima development Jung calls Mary. It manifests in religious feelings and a capacity for genuine friendship with women. The man with an anima of this kind is able to see a woman as she is, independent of his own needs. His sexuality is integrated into his life, not an autonomous function that drives him. He can differentiate between love and lust. He is capable of lasting relationships because he can tell the difference between the object of his desire and his inner image of woman.

In the fourth stage, as Sophia (called Wisdom in the Bible) man’s anima functions as a guide to the inner life, mediating to consciousness the contents of the unconscious. Sophia is behind the need to grapple with the grand philosophical issues, the search for meaning. She is Beatrice in Dante’s Inferno, and the creative muse in any artist’s life. She is a natural mate for the archetypal “wise old man” in the male psyche. The sexuality of a man at this stage incorporates a spiritual dimension.

The process of Anima development

Theoretically, a man’s anima development proceeds through these stages as he grows older. When the possibilities of one have been exhausted—which is to say, when adaptation to oneself and outer circumstances requires it—the psyche stimulates the move to the next stage.

In fact, the transition from one stage to another seldom happens without a struggle, for the psyche not only promotes and supports growth, it is also, paradoxically, conservative and loath to give up what it knows. Hence a psychological crisis is commonly precipitated when there is a pressing need for a man to move from one stage to the next.

For that matter, a man may have periodic contact with any number of anima images, at any time of life, depending on what is required to compensate the current dominant conscious attitude. The reality is that psychologically men live in a harem. Any man may observe this for himself by paying close attention to his dreams and fantasies. His soul-image appears in many different forms, as myriad as the expressions of an actual woman’s femininity.

In subhuman guise, the anima may manifest as snake, toad, cat or bird; on a slightly higher level, as nixie, pixie, mermaid. In human form—to mention only a few personifications modelled on goddesses in Greek mythology—the anima may appear as Hera, consort and queen; Demeter/Persephone, the mother-daughter team; Aphrodite, the lover; Pallas Athene, carrier of culture and protectress of heroes; Artemis, the stand-offish huntress; and Hecate, ruler in the netherworld of magic.

The assimilation of a particular anima-image results in its death, so to speak. That is to say, as one personification of the anima is consciously understood, it is supplanted by another. Anima development in a man is thus a continuous process of death and rebirth. An understanding of this process is very important in surviving the transition stage between one anima-image and the next. Just as no real woman relishes being discarded for another, so no anima-figure willingly takes second place to her upstart rival. In this regard, as in so much else involved in a person’s psychological development, the ‘good’ is the enemy of the ‘better’.

To have made contact with your inner woman at all is a blessing; to be tied to one that holds you back can be fatal.

While the old soul-mate clamours for the attention that now, in order for the man to move on, is demanded by and due to the new one, the man is often assailed by conflicting desires. The struggle is not just an inner, metaphorical one; it also involves his lived relationships with real women. The resultant suffering and inner turmoil, the tension and sleepless nights, are comparable to what occurs in any conflict situation.

As the mediating function between the ego and the unconscious, the anima is complementary to the persona and in a compensatory relationship to it. That is to say, all those qualities absent from the outer attitude will be found in the inner. Jung gives the example of a tyrant tormented by bad dreams and gloomy forebodings:

Outwardly ruthless, harsh, and unapproachable, he jumps inwardly at every shadow, is at the mercy of every mood, as though he were the feeblest and most impressionable of men. Thus his anima contains all those fallible human qualities his persona lacks. – Carl Jung, CW 6, par. 804

Similarly, when a man identifies with his persona, he is in effect possessed by the anima, with all the attendant symptoms.

Identity … with the persona automatically leads to an unconscious identity with the anima because, when the ego is not differentiated from the persona, it can have no conscious relation to the unconscious processes. Consequently it is these processes, it is identical with them. Anyone who is himself his outward role will infallibly succumb to the inner processes; he will either frustrate his outward role by absolute inner necessity or else reduce it to absurdity, by a process of enantiodromia. – (Note: Enantiodromia is a term originally coined by the Greek philosopher Heraclitus. Literally it means “running counter to,” referring to the emergence of the unconscious opposite in the course of time.)

He can no longer keep to his individual way, and his life runs into one deadlock after another. Moreover, the anima is inevitably projected upon a real object, with which he gets into a relation of almost total dependence. – Carl Jung, CW 6, par. 807

Thus it is essential for a man to distinguish between who he is and who he appears to be. Symptomatically, in fact, there is no significant difference between persona identification and anima possession; both are indications of unconsciousness.