An approach to the interpretation of psychic activity based on its goal or purpose rather than its cause or source. (See also final; compare reductive – see below.) 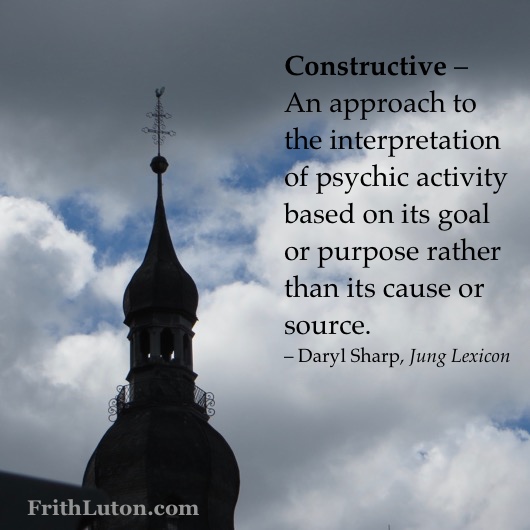 I use constructive and synthetic to designate a method that is the antithesis of reductive. The constructive method is concerned with the elaboration of the products of the unconscious (dreams, fantasies, etc.). It takes the unconscious product as a symbolic expression which anticipates a coming phase of psychological development. [“Definitions,” CW 6, par. 701.]

The constructive or synthetic method of treatment presupposes insights which are at least potentially present in the patient and can therefore be made conscious. [“The Transcendent Function,” CW 8, par. 145.]

The constructive method involves both the amplification of symbols and their interpretation on the subjective level. Its use in dream interpretation aims at understanding how the conscious orientation may be modified in light of the dream’s symbolic message. This is in line with Jung’s belief that the psyche is a self-regulating system.

In the treatment of neurosis, Jung saw the constructive method as complementary, not in opposition, to the reductive approach of classical psychoanalysis.

We apply a largely reductive point of view in all cases where it is a question of illusions, fictions, and exaggerated attitudes. On the other hand, a constructive point of view must be considered for all cases where the conscious attitude is more or less normal, but capable of greater development and refinement, or where unconscious tendencies, also capable of development, are being misunderstood and kept under by the conscious mind. [“Analytical Psychology and Education,” CW 17, par. 195.]

Literally, “leading back,” descriptive of interpretations of dreams and neurosis in terms of events in outer life, particularly those in childhood. (Compare constructive and final.) 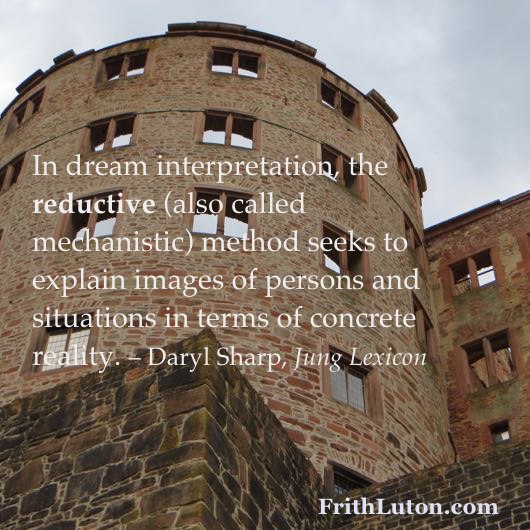 The reductive method is oriented backwards, in contrast to the constructive method .… The interpretive methods of both Freud and Adler are reductive, since in both cases there is a reduction to the elementary processes of wishing or striving, which in the last resort are of an infantile or physiological nature. … Reduction has a disintegrative effect on the real significance of the unconscious product, since this is either traced back to its historical antecedents [e.g., childhood] and thereby annihilated, or integrated once again with the same elementary process from which it arose. [“Definitions,” CW 6, par. 788.]

In dream interpretation, the reductive (also called mechanistic) method seeks to explain images of persons and situations in terms of concrete reality. The constructive or final approach focuses on the dream’s symbolic content.

Although Jung himself concentrated on the constructive approach, he regarded reductive analysis as an important first step in the treatment of psychological problems, particularly in the first half of life.

The neuroses of the young generally come from a collision between the forces of reality and an inadequate, infantile attitude, which from the causal point of view is characterized by an abnormal dependence on the real or imaginary parents, and from the teleological point of view by unrealizable fictions, plans, and aspirations. Here the reductive methods of Freud and Adler are entirely in place. [“The Problem of the Attitude-Type,” CW 7, par. 88.]