Symbiosis. A psychological state where contents of one’s personal unconscious are experienced in another person. (See also projection and soul-image.) 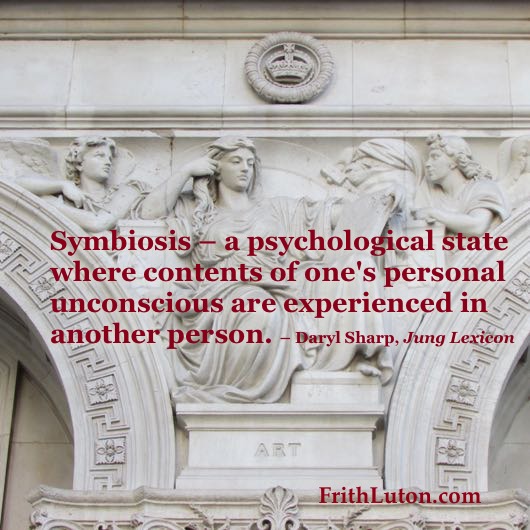 Symbiosis manifests in unconscious interpersonal bonds, easily established and difficult to break. Jung gave an example in terms of introversion and extraversion. Where one of these attitudes is dominant, the other, being unconscious, is automatically projected.

Either type has a predilection to marry its opposite, each being unconsciously complementary to the other. … The one takes care of reflection and the other sees to the initiative and practical action. When the two types marry, they may effect an ideal union. So long as they are fully occupied with their adaptation to the manifold external needs of life they fit together admirably. [“The Problem of the Attitude-Type,” CW 7, par. 80.]

Problems in such relationships typically surface only later in life, accompanied by strong affect.

When the man has made enough money, or if a fine legacy should drop from the skies and external necessity no longer presses, then they have time to occupy themselves with one another. Hitherto they stood back to back and defended themselves against necessity. But now they turn face to face and look for understanding – only to discover that they have never understood one another. Each speaks a different language. Then the conflict between the two types begins. This struggle is envenomed, brutal, full of mutual depreciation, even when conducted quietly and in the greatest intimacy. For the value of the one is the negation of value for the other. [Ibid.]

The ending of a symbiotic relationship often precipitates an outbreak of neurosis, stimulated by an inner need to assimilate those aspects of oneself that were projected onto the partner.