A characteristic general attitude or function.

[The] function-types, which one can call the thinking, feeling, sensation, and intuitive types, may be divided into two classes according to the quality of the basic function, i.e., into the rational and the irrational. The thinking and feeling types belong to the former class, the sensation and intuitive types to the latter. A further division into two classes is permitted by the predominant trend of the movement of libido, namely introversion and extraversion. [“Definitions,” CW 6, par. 835.] 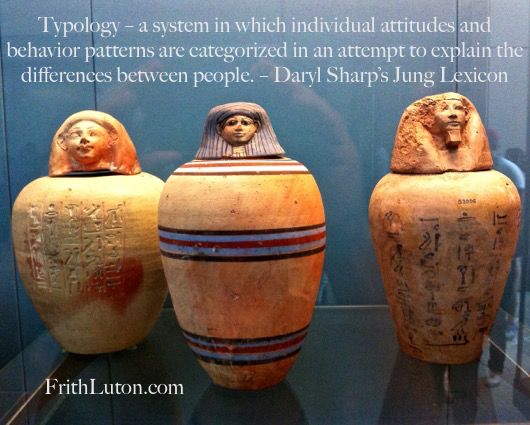 Jung believed that the early distortion of type due to parental or other environmental influences can lead to neurosis in later life.

As a rule, whenever such a falsification of type takes place … the individual becomes neurotic later, and can be cured only by developing the attitude consonant with his nature. [“General Description of the Types,” ibid., par. 560.]

A system in which individual attitudes and behavior patterns are categorized in an attempt to explain the differences between people.

Jung’s model of typology grew out of an extensive historical review of the type question in literature, mythology, aesthetics, philosophy and psychopathology. Whereas earlier classifications were based on observations of temperamental or physiological behavior patterns, Jung’s model is concerned with the movement of energy and the way in which one habitually or preferentially orients oneself in the world.

First and foremost, it is a critical tool for the research worker, who needs definite points of view and guidelines if he is to reduce the chaotic profusion of individual experiences to any kind of order. … Secondly, a typology is a great help in understanding the wide variations that occur among individuals, and it also furnishes a clue to the fundamental differences in the psychological theories now current. Last but not least, it is an essential means for determining the “personal equation” of the practising psychologist, who, armed with an exact knowledge of his differentiated and inferior functions, can avoid many serious blunders in dealing with his patients. [“Psychological Typology,” ibid., par. 986.]

Jung differentiated eight typological groups: two personality attitudes – introversion and extraversion – and four functions – thinking, sensation, intuition and feeling, each of which may operate in an introverted or extraverted way.

Introversion and extraversion are psychological modes of adaptation. In the former, the movement of energy is toward the inner world. In the latter, interest is directed toward the outer world. In one case the subject (inner reality) and in the other the object (things and other people, outer reality) is of primary importance.

[Introversion] is normally characterized by a hesitant, reflective, retiring nature that keeps itself to itself, shrinks from objects, is always slightly on the defensive and prefers to hide behind mistrustful scrutiny. [Extraversion] is normally characterized by an outgoing, candid, and accommodating nature that adapts easily to a given situation, quickly forms attachments, and, setting aside any possible misgivings, will often venture forth with careless confidence into unknown situations. In the first case obviously the subject, and in the second the object, is all-important. [“The Problem of the Attitude-Type,” CW 7, par. 62. ]

The crucial factor in determining whether one is introverted or extraverted, as opposed to which attitude is currently operative, is not what one does but rather the motivation for doing it – the direction in which one’s energy naturally, and usually, flows.

Whether a person is predominantly introverted or extraverted only becomes apparent in association with one of the four functions, each with its special area of expertise: thinking refers to the process of cognitive thought, sensation is perception by means of the physical sense organs, feeling is the function of subjective judgment or valuation, and intuition refers to perception via the unconscious.

In this way we can orient ourselves with respect to the immediate world as completely as when we locate a place geographically by latitude and longitude. The four functions are somewhat like the four points of the compass; they are just as arbitrary and just as indispensable. Nothing prevents our shifting the cardinal points as many degrees as we like in one direction or the other, or giving them different names. It is merely a question of convention and intelligibility.

But one thing I must confess: I would not for anything dispense with this compass on my psychological voyages of discovery. [“A Psychological Theory of Types,” CW 6, pars. 958f.]

Jung’s basic model, including the relationship between the four functions, is a quaternity, as shown in the diagram. (Thinking is here arbitrarily placed at the top; any of the other functions might be placed there, according to which one a person most favors.)

Jung believed that any one function by itself is not sufficient for ordering our experience of ourselves or the world around us; all four are required for a comprehensive understanding.

For complete orientation all four functions should contribute equally: thinking should facilitate cognition and judgment, feeling should tell us how and to what extent a thing is important or unimportant for us, sensation should convey concrete reality to us through seeing, hearing, tasting, etc., and intuition should enable us to divine the hidden possibilities in the background, since these too belong to the complete picture of a given situation. [“Psychological Types,” ibid., par. 900.] Jung acknowledged that the four orienting functions do not contain everything in the conscious psyche. Will power and memory, for instance, are not included, because although they may be affected by the way one functions typologically, they are not in themselves typological determinants.]

The terms “superior” and “inferior” in this context do not imply value judgments. No function is any better than any of the others. The superior function is simply the most developed, the one a person is most likely to use; similarly, inferior does not mean pathological but merely less used compared to the favored function. Moreover, the constant influx of unconscious contents into consciousness is such that it is often difficult for oneself, let alone an outside observer, to tell which functions belong to the conscious personality and which to the unconscious.

Generally speaking, a judging observer [thinking or feeling type] will tend to seize on the conscious character, while a perceptive observer [sensation type or intuitive] will be more influenced by the unconscious character, since judgment is chiefly concerned with the conscious motivation of the psychic process, while perception registers the process itself. [“General Description of the Types,” ibid., par. 576.]

What happens to those functions that are not consciously brought into daily use and therefore not developed?

They remain in a more or less primitive and infantile state, often only half conscious, or even quite unconscious. The relatively undeveloped functions constitute a specific inferiority which is characteristic of each type and is an integral part of his total character. The one-sided emphasis on thinking is always accompanied by an inferiority of feeling, and differentiated sensation is injurious to intuition and vice versa. [“A Psychological Theory of Types,” ibid., par. 955.]

Jung described two of the four functions as rational (or judging) and two as irrational (or perceiving).
Thinking, as a function of logical discrimination, is rational. So is feeling, which as a way of evaluating our likes and dislikes can be quite as discriminating as thinking. Both are based on a reflective, linear process that coalesces into a particular judgment. Sensation and intuition are called irrational functions because they do not depend on logic. Each is a way of perceiving simply what is: sensation sees what is in the external world, intuition sees (or “picks up”) what is in the inner world.

Jung’s model of typology is the basis for modern type tests, such as the Myers-Briggs Type Indicator (MBTI) and the Singer-Loomis Personality Profile, used in organizational settings.