A form of psychic activity, or manifestation of libido, that remains the same in principle under varying conditions. (See also differentiation, inferior, primary and auxiliary functions,  and typology.)

Sensation establishes what is actually present, thinking enables us to recognize its meaning, feeling tells us its value, and intuition points to possibilities as to whence it came and whither it is going in a given situation. [“A Psychological Theory of Types,” CW 6, par. 958.] 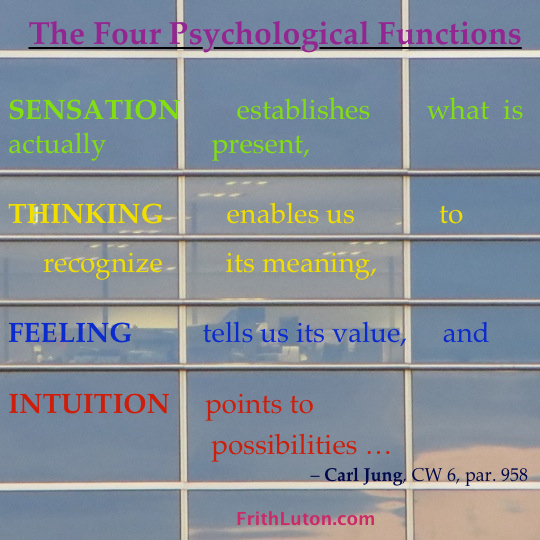 Though all the functions exist in every psyche, one function is invariably more consciously developed than the others, giving rise to a one-sidedness that often leads to neurosis.

The more [a man] identifies with one function, the more he invests it with libido, and the more he withdraws libido from the other functions. They can tolerate being deprived of libido for even quite long periods, but in the end they will react. Being drained of libido, they gradually sink below the threshold of consciousness, lose their associative connection with it, and finally lapse into the unconscious. This is a regressive development, a reversion to the infantile and finally to the archaic level … [which] brings about a dissociation of the personality. [“The Type Problem in Aesthetics,” ibid., pars. 502f.]

The separation of parts from a whole, necessary for conscious access to the psychological functions.

An undifferentiated function is characterized by ambivalence (every position entails its own negative), which leads to characteristic inhibitions in its use.