The psychological function that evaluates or judges what something or someone is worth. (Compare thinking.)

A feeling is as indisputable a reality as the existence of an idea. [“The Psychology of the Transference,” CW 16, par. 531.]

The feeling function is the basis for “fight or flight” decisions. As a subjective process, it may be quite independent of external stimuli. In Jung’s view it is a rational function, like thinking, in that it is decisively influenced not by perception (as are the functions of sensation and intuition) but by reflection. A person whose overall attitude is oriented by the feeling function is called a feeling type. 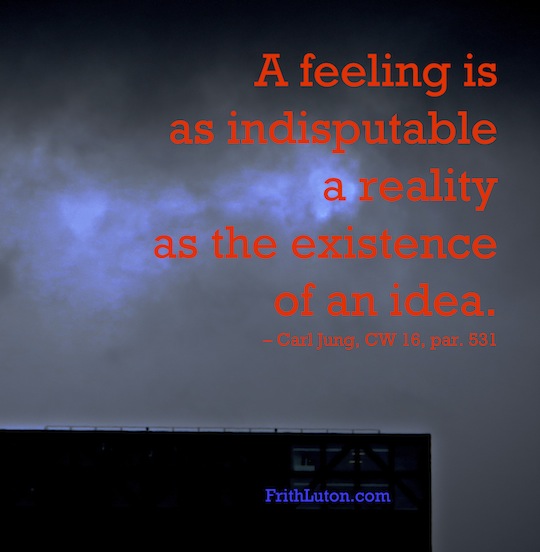 In everyday usage, feeling is often confused with emotion. The latter, more appropriately called affect, is the result of an activated complex. Feeling not contaminated by affect can be quite cold.

Feeling is distinguished from affect by the fact that it produces no perceptible physical innervations, i.e., neither more nor less than an ordinary thinking process. [“Definitions,” CW 6, par. 725.]

The mental process of interpreting what is perceived. (Compare feeling.)

In Jung’s model of typology, thinking is one of the four functions used for psychological orientation. Along with feeling, it is a rational function. If thinking is the primary function, then feeling is automatically the inferior function.

Thinking, if it is to be real thinking and true to its own principle, must rigorously exclude feeling. This, of course, does not do away with the the fact that there are individuals whose thinking and feeling are on the same level, both being of equal motive power for consciousness. But in these cases there is also no question of a differentiated type, but merely of relatively undeveloped thinking and feeling. [“General Description of the Types,” CW 6, par. 667.] 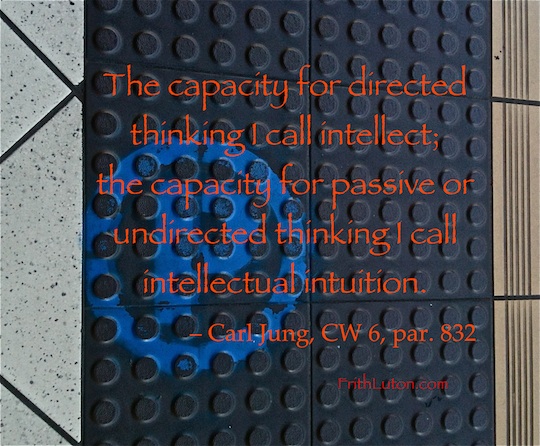 As a process of apperception, thinking may be active or passive.

Active thinking is an act of the will, passive thinking is a mere occurrence. In the former case, I submit the contents of ideation to a voluntary act of judgment; in the latter, conceptual connections establish themselves of their own accord, and judgments are formed that may even contradict my intention. … Active thinking, accordingly, would correspond to my concept of directed thinking. Passive thinking … I would call … intuitive thinking. [“Definitions,” ibid., par. 830.]