Home » Articles » Meditation as a Tool for Self-knowledge

Meditation as a tool for self-knowledge has been used throughout the centuries in many different ways, and with greatly different emphasis.

Meditation, in broad terms, can be defined as a technique of focused introspection.

Jung was aware of its vast religious use, particularly ‘in the East’, that is, in Asian countries and religions. 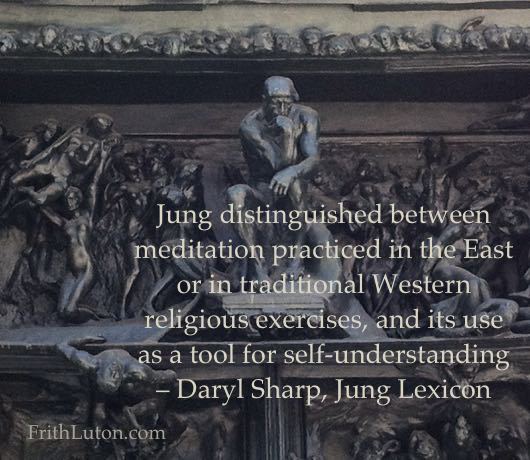 But Jung was a psychiatrist, interested in healing the human psyche and charting a path toward wholeness. His ‘opus’ was individuation, and it required deep self-knowledge of a kind not easily won. Therefore he was less interested in the religious uses of meditation practices, or the spiritual states these might induce.

In general, meditation and contemplation have a bad reputation in the West. They are regarded as a particularly reprehensible form of idleness or as pathological narcissism. No one has time for self-knowledge or believes that it could serve any sensible purpose. Also, one knows in advance that it is not worth the trouble to know oneself, for any fool can know what he is. We believe exclusively in doing and do not ask about the doer, who is judged only by achievements that have collective value. The general public seems to have taken cognizance of the existence of the unconscious psyche more than the so-called experts, but still nobody has drawn any conclusions from the fact that Western man confronts himself as a stranger and that self-knowledge is one of the most difficult and exacting of the arts. [“The Conjunction,” CW 14, par. 709.]

Jung gives us some further insight into his personal use of the term ‘meditation’ in this paragraph. [Note that this is from Mysterium Coniunctionis – An Inquiry into the Separation and Synthesis of Psychic Opposites in Alchemy. This text deals with the complex topic of Alchemy and its relevance to psychology.] –

Expressed in the language of the Hermetic philosophy, the ego-personality’s coming to terms with its own background, the shadow, corresponds to the union of spirit and soul in the unio mentalis, which is the first stage of the coniunctio. What I call coming to terms with the unconscious the alchemists called “meditation”. Ruland says of this: ”Meditation: The name of an Internal Talk of one person with another who is invisible, as in the invocation of the Deity, of communion with one’s self, or with one’s good angel.” This somewhat optimistic definition must immediately be qualified by a reference to the adept’s relationship with his spiritus familiaris, who we can only hope was a good one. In this respect, Mercurius is a rather unreliable companion, as the testimony of the alchemists agrees. [“The Conjunction,” CW 14, par. 707.]

Here, Jung appears to be warning us not to assume the reliability of the ‘inner voice’.

Contemplation and Meditation as a tool for self-knowledge

Further, Jung also distinguished between meditation practiced in the East or in traditional Western religious exercises, and its use as a tool for self-understanding, particularly in the realization of projections.

Confrontation with the shadow produces at first a dead balance, a standstill […] Everything becomes doubtful, which is why the alchemists called this stage nigredo, chaos, melancholia. […] Here I must remind the reader who is acquainted neither with alchemy nor with the psychology of the unconscious that nowadays one very seldom gets into such a situation. [… ] There are relatively few people who have experienced the effects of an analysis of the unconscious on themselves, and almost nobody hits on the idea of using the objective hints given by dreams as a theme for meditation.

If the ancient art of meditation is practised at all today, it is practised only in religious or philosophical circles, where a theme is subjectively chosen by the meditant or prescribed by an instructor, as in the Ignatian Exercitia or in certain theosophical exercises that developed under Indian influence. These methods are of value only for increasing concentration and consolidating consciousness, but have no significance as regards affecting a synthesis of the personality. On the contrary, their purpose is to shield consciousness from the unconscious and to suppress it. [“The Conjunction,” CW 14, par. 708.]

Jung’s Focus regarding Meditation and Contemplation

We can see that Jung’s focus is on the deeper and more rigorous use of contemplation and meditation as a tool for self-knowledge than what he perceived was generally practised during his lifetime. He was particularly interested in gaining access to the unconscious, and felt that the meditation practices he saw in his lifetime did not offer enough in this regard.

As we know now, in the 2020s, the more widespread interest in meditation has greatly expanded and developed. There are now hundreds of books on the topic.

Many styles of meditation encountered ‘in the West’ are promoted as means of creating a stillness or focus of the mind. Lesser known are the techniques that challenge us to confront the shadow.

Regardless, Jung appears to have been less interested in pointing toward a technique or a tool, than to the goal of what he termed individuation.

Adapted and expanded from © from Daryl Sharp’s Jung Lexicon, reproduced with kind permission of the author.