Jungian Analysis. A form of therapy specializing in neurosis, aimed at bringing unconscious contents to consciousness; also called analytic therapy, based on the school of thought developed by C.G. Jung called analytical (or complex) psychology. 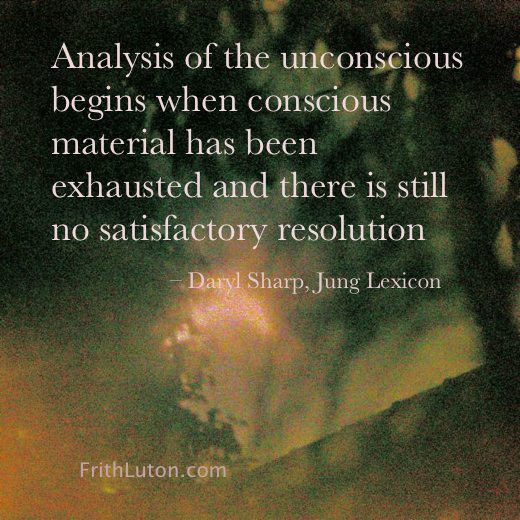 [Jungian analysis] is only a means for removing the stones from the path of development, and not a method … of putting things into the patient that were not there before. It is better to renounce any attempt to give direction, and simply try to throw into relief everything that the analysis brings to light, so that the patient can see it clearly and be able to draw suitable conclusions. Anything he has not acquired himself he will not believe in the long run, and what he takes over from authority merely keeps him infantile. He should rather be put in a position to take his own life in hand. The art of analysis lies in following the patient on all his erring ways and so gathering his strayed sheep together. [“Some Crucial Points in Psychoanalysis,” CW 4, par. 643.]

There is a widespread prejudice that Jungian analysis is something like a “cure,” to which one submits for a time and is then discharged healed. That is a layman’s error left over from the early days of psychoanalysis. Analytical treatment could be described as a readjustment of psychological attitude achieved with the help of the doctor. … [But] there is no change that is unconditionally valid over a long period of time. [“The Transcendent Function,” CW 8, par. 142.]

Jung initially made a distinction between analysis of the unconscious [Jung deliberately used this expression instead of “psychoanalysis”: “I wish to leave that term entirely to the Freudians. What they understand by psychoanalysis is no mere technique, but a method which is dogmatically bound up with and based upon Freud’s sexual theory. When Freud publicly declared that psychoanalysis and his sexual theory were indissolubly wedded, I was obliged to strike out on a different path.” (“Analytical Psychology and Education,” CW 17, par. 180)] and anamnestic analysis. The latter is concerned primarily with contents of consciousness already available or easily brought to mind, and with supporting or strengthening the ego. The unconscious is a factor only indirectly.

It consists in a careful anamnesis or reconstruction of the historical development of the neurosis. The material elicited in this way is a more or less coherent sequence of facts told to the doctor by the patient, so far as he can remember them. He naturally omits many details which either seem unimportant to him or which he has forgotten. The experienced analyst who knows the usual course of neurotic development will put questions which help the patient to fill in some of the gaps. Very often this procedure by itself is of great therapeutic value, as it enables the patient to understand the chief factors of his neurosis and may eventually bring him to a decisive change of attitude. [“Analytical Psychology and Education,” ibid., par. 177.]

In addition to the favourable effect produced by the realization of previously unconscious connections, it is usual for the doctor to give some good advice, or encouragement, or even a reproof. [Ibid., par. 178.]

Analysis of the unconscious begins when conscious material has been exhausted and there is still no satisfactory resolution of the neurosis; it requires an ego strong enough to deal directly with unconscious material, particularly dreams. Jung believed that analysis in this sense was particularly suited to psychological problems in the second half of life, but even then he expressed caution.

Consistent support of the conscious attitude has in itself a high therapeutic value and not infrequently serves to bring about satisfactory results. It would be a dangerous prejudice to imagine that analysis of the unconscious is the one and only panacea which should therefore be employed in every case. It is rather like a surgical operation and we should only resort to the knife when other methods have failed. So long as it does not obtrude itself the unconscious is best left alone. [“The Psychology of the Transference,” CW 16, par. 381.]

In his analytic work, Jung shunned diagnosis and prognosis. He used no systematic technique or method. His aim was to approach each case with a minimum of prior assumptions, although he acknowledged that the personality and psychological disposition of the analyst made complete objectivity impossible.

The ideal would naturally be to have no assumptions at all. But this is impossible even if one exercises the most rigorous self-criticism, for one is oneself the biggest of all one’s assumptions, and the one with the gravest consequences. Try as we may to have no assumptions and to use no ready-made methods, the assumption that I myself am will determine my method: as I am, so will I proceed. [“Appendix,” ibid., par.543.]

Jung also insisted that those training to be analysts must have a thorough personal analysis.

We have learned to place in the foreground the personality of the doctor himself as a curative or harmful factor; … what is now demanded is his own transformation – the self-education of the educator. … The doctor can no longer evade his own difficulty by treating the difficulties of others: the man who suffers from a running abscess is not fit to perform a surgical operation. [“Problems of Modern Psychotherapy,” ibid., par. 172.]