An inflated consciousness is always egocentric and conscious of nothing but its own existence. – Carl Jung, CW 12, par. 563 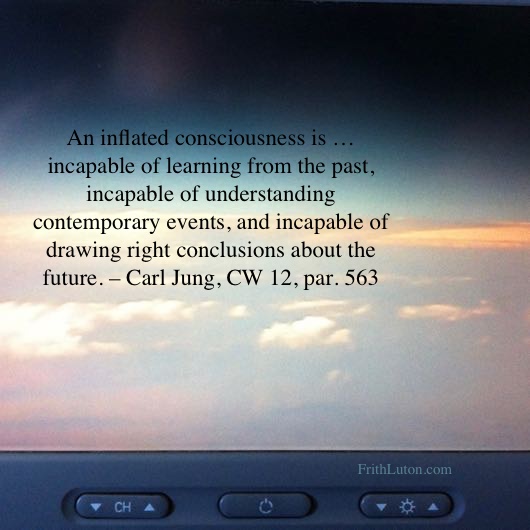 ‘Hearing the call’ is a numinous experience. Such events always have a deep emotional resonance. Hitherto unconscious contents have become conscious. What was previously unknown is now known. That automatically results in an enlargement of the personality. Cults, sudden ‘born again’ conversions and other far-reaching changes of mind—like Paul on the road to Damascus—have their origin in such experiences. Whether for good or ill, only time will tell. Consciousness is temporarily disoriented, life as one has known it is disrupted, and when the ego is particularly weak the entire personality may disintegrate.

The extreme possibility is schizophrenia, a splitting of the mind—multiple personalities with no central control, a free-for-all among the complexes. But the more common danger is inflation, an unavoidable concomitant of realising new things about oneself.

Inflation is a psychological phenomenon that involves an extension of the personality beyond individual limits. This regularly happens in analysis, as ego-awareness lights up the dark, but it is common in everyday life as well. One example is the way in which people identify with their business or title, as if they themselves were the whole complex of social factors which in fact characterise only their position. This is an unwarranted extension of oneself, whimsically bestowed by others.

Here are two passages by Jung on inflation:

“Knowledge puffeth up,” Paul writes to the Corinthians, for the new knowledge had turned the heads of many, as indeed constantly happens. The inflation has nothing to do with the kind of knowledge, but simply and solely with the fact that any new knowledge can so seize hold of a weak head that he no longer sees and hears anything else. He is hypnotised by it, and instantly believes he has solved the riddle of the universe. But that is equivalent to almighty self-conceit. [“The Relations Between the Ego and the Unconscious,” Two Essays on Analytical Psychology, CW 7, par. 243, note 1]

Every step toward greater consciousness creates a kind of Promethean guilt. Through self-knowledge, the gods are, as it were, robbed of their fire; that is, something that was the property of unconscious powers is torn out of its natural context and subordinated to the whims of the conscious mind. The one who has ‘stolen’ the new knowledge becomes alienated from others. The pain of this loneliness is the vengeance of the gods, for never again can one return to the fold. Prometheus’s punishment was to be chained to the lonely cliffs of the Caucasus, forsaken of God and man. An eagle fed on his liver, and as much as was devoured during the day, that much grew again during the night.

Fortunately, few of us have to go through all that. The ancient notion of the liver as the seat of the soul may linger on, but nowadays common sense and the reactions of others to an assumed god-likeness are usually enough to bring one down to earth.

However, there is still the feeling of having been chosen, set apart. Thus anyone who has found his or her individual path is bound to feel estranged from those who have not. This is simply a particular case of what I have generally observed, that those who have worked on themselves don’t care to spend much time with those who haven’t. One might think this to be elitist, but it is only natural. With a sense of vocation comes the realisation that your time on this earth is precious. You become reluctant to squander it on those who don’t know who they are or why they are here, and are not inclined to ask.

Those who hear the call and respond become redeemer personalities—leaders, heroes, beacons of hope for others. Individuals with personality have mana. [Mana is a Melanesian word referring to a bewitching or numinous quality in gods and sacred objects. In individual psychology, Jung used the term ‘mana personality’ to describe the inflationary result of assimilating previously unconscious contents.]

But beware of those who seek vaingloriously to capitalise on this aura, including yourself. Those with mana may seem to be in possession of an absolute truth, but in fact the main thing they have that distinguishes them from others is a bedrock sense of themselves and the resolve to obey the law that commands from within.