The object of active imagination is to give a voice to sides of the personality (particularly the anima/animus and the shadow) that are normally not heard, thereby establishing a line of communication between consciousness and the unconscious. Even when the end products – drawing, painting, writing, sculpture, dance, music, etc. – are not interpreted, something goes on between creator and creation that contributes to a transformation of consciousness. 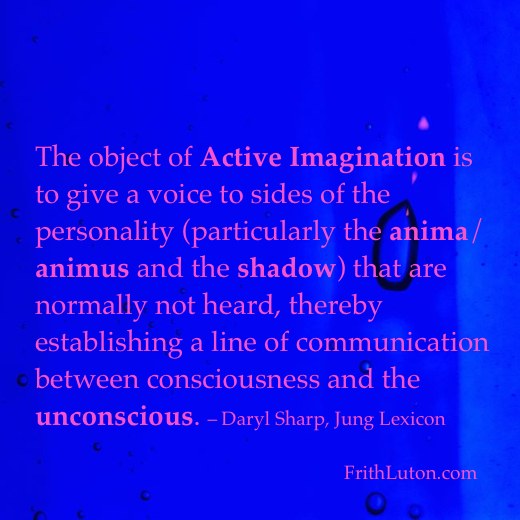 The first stage of active imagination is like dreaming with open eyes. It can take place spontaneously or be artificially induced.

In the latter case you choose a dream, or some other fantasy-image, and concentrate on it by simply catching hold of it and looking at it. You can also use a bad mood as a starting-point, and then try to find out what sort of fantasy-image it will produce, or what image expresses this mood. You then fix this image in the mind by concentrating your attention. Usually it will alter, as the mere fact of contemplating it animates it. The alterations must be carefully noted down all the time, for they reflect the psychic processes in the unconscious background, which appear in the form of images consisting of conscious memory material. In this way conscious and unconscious are united, just as a waterfall connects above and below. [“The Conjunction,” CW 14, par. 706.]

The second stage of active imagination, beyond simply observing the images, involves a conscious participation in them, the honest evaluation of what they mean about oneself, and a morally and intellectually binding commitment to act on the insights. This is a transition from a merely perceptive or aesthetic attitude to one of judgment.

Although, to a certain extent, he looks on from outside, impartially, he is also an acting and suffering figure in the drama of the psyche. This recognition is absolutely necessary and marks an important advance. So long as he simply looks at the pictures he is like the foolish Parsifal, who forgot to ask the vital question because he was not aware of his own participation in the action. [An allusion to the medieval Grail legend. The question Parsifal failed to ask was, “Whom does the Grail serve?”] … But if you recognize your own involvement you yourself must enter into the process with your personal reactions, just as if you were one of the fantasy figures, or rather, as if the drama being enacted before your eyes were real. [“The Conjunction,” CW 14, par. 753.]

The judging attitude implies a voluntary involvement in those fantasy-processes which compensate the individual and – in particular – the collective situation of consciousness. The avowed purpose of this involvement is to integrate the statements of the unconscious, to assimilate their compensatory content, and thereby produce a whole meaning which alone makes life worth living and, for not a few people, possible at all. [Ibid., par. 756.]