Wounded Healer. An archetypal dynamic that may be constellated in an analytic relationship. 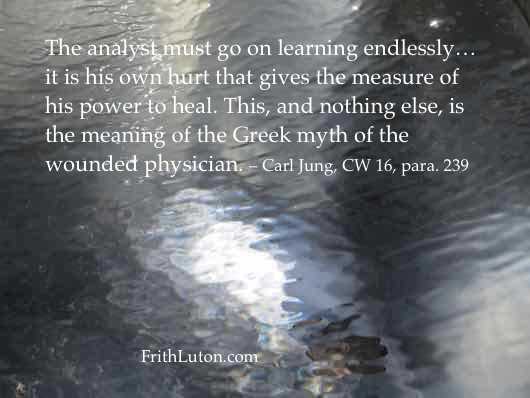 This term derives from the legend of Asclepius, a Greek doctor who in recognition of his own wounds established a sanctuary at Epidaurus where others could be healed of their ‘wounds’.

Those seeking to be cured went through a process called incubation. First they had a cleansing bath, thought to have a purifying effect on the soul as well as the body. Uncontaminated by the body, the soul was free to commune with the gods. After preliminary sacrificial offerings, the incubants lay on a couch and went to sleep. If they were lucky, they had a healing dream; if they were luckier, a snake came in the night and bit them.

The wounded healer archetype can be schematized by a variation of the diagram used by Jung to illustrate the lines of communication in a relationship. [See “The Psychology of the Transference,” The Practice of Psychotherapy, CW 16, par. 422.] 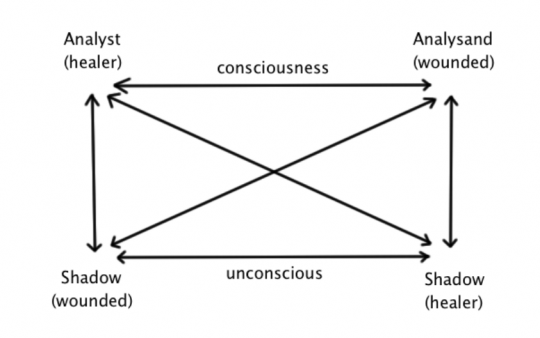 The drawing shows six double-headed arrows, indicating that communication can move in either direction – twelve ways in which information can pass between analyst and analysand.

According to this paradigm, the analyst’s wounds, although presumed to be relatively conscious after a lengthy personal analysis, live a shadowy existence. They can always be reconstellated in particular situations, and especially when working with someone whose wounds are similar. (They are the basis for countertransference reactions in analysis.)

In this model, the unconscious relationship between analyst and analysand is quite as important, in terms of the healing process, as what is consciously communicated. There are two other significant implications:

1) Healing can take place only if the analyst has an ongoing relationship with the unconscious. Otherwise, he or she may identify with the healer archetype, a common form of inflation.

2) Depth psychology is a dangerous profession, since the analyst is forever prone to being infected by the other’s wounds – or having his or her wounds reopened.

No analysis is capable of banishing all unconsciousness for ever. The analyst must go on learning endlessly, and never forget that each new case brings new problems to light and thus gives rise to unconscious assumptions that have never before been constellated. We could say, without too much exaggeration, that a good half of every treatment that probes at all deeply consists in the doctor’s examining himself, for only what he can put right in himself can he hope to put right in the patient. It is no loss, either, if he feels that the patient is hitting him, or even scoring off him: it is his own hurt that gives the measure of his power to heal. This, and nothing else, is the meaning of the Greek myth of the wounded physician. [“Fundamental Questions of Psychotherapy,” ibid. para. 239.]