Soul. A functional complex in the psyche. (See also Eros, Logos and soul-image.) While Jung often used the word soul in its traditional theological sense, he strictly limited its psychological meaning.

I have been compelled, in my investigations into the structure of the unconscious, to make a conceptual distinction between soul and psyche. By psyche I understand the totality of all psychic processes, conscious as well as unconscious. By soul, on the other hand, I understand a clearly demarcated functional complex that can best be described as a “personality.” [“Definitions,” CW 6, par. 797] 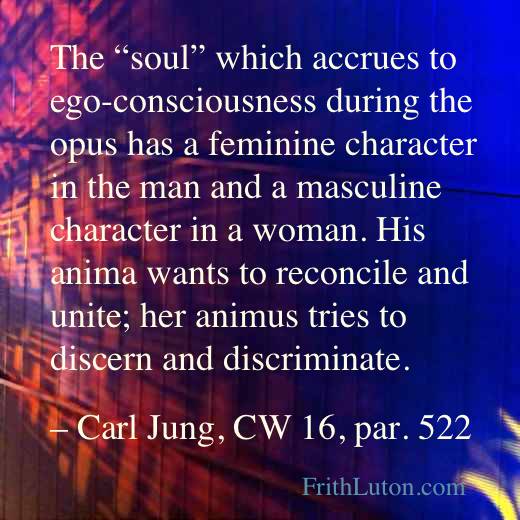 With this understanding, Jung outlined partial manifestations of the soul in terms of anima/animus and persona. In his later writing on the transference, informed by his study of the alchemical opus – which Jung understood as psychologically analogous to the individuation process – he was more specific.

The “soul” which accrues to ego-consciousness during the opus has a feminine character in the man and a masculine character in a woman. His anima wants to reconcile and unite; her animus tries to discern and discriminate. [“The Psychology of the Transference,” CW 16, par. 522.]