You are here: Home / Articles / Regressive Restoration of the Persona

Regressive restoration of the persona. A term used to describe what can happen when there has been a major collapse in the conscious attitude. 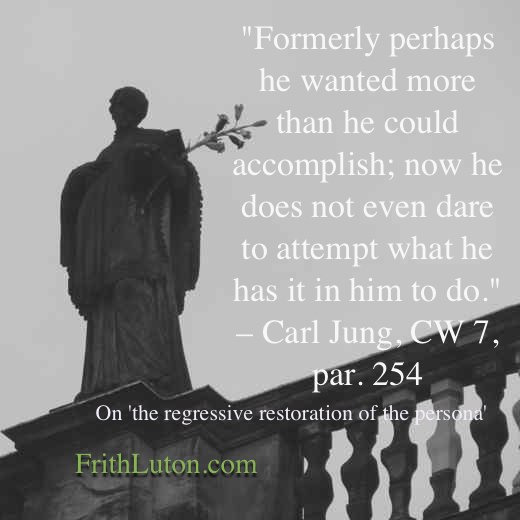 Take as an example a businessman who takes too great a risk and consequently goes bankrupt. If he does not allow himself to be discouraged by this depressing experience, but, undismayed, keeps his former daring, perhaps with a little salutary caution added, his wound will be healed without permanent injury. But if, on the other hand, he goes to pieces, abjures all further risks, and laboriously tries to patch up his social reputation within the confines of a much more limited personality, doing inferior work with the mentality of a scared child, in a post far below him, then, technically speaking, he will have restored his persona in a regressive way. … Formerly perhaps he wanted more than he could accomplish; now he does not even dare to attempt what he has it in him to do. [“The Relations between the Ego and the Unconscious,” CW 7, par. 254.]

The regressive restoration of the persona is a possible course only for the man who owes the critical failure of his life to his own inflatedness. With diminished personality, he turns back to the measure he can fill. But in every other case resignation and self-belittlement are an evasion, which in the long run can be kept up only at the cost of neurotic sickliness. [Ibid., par. 259.]