All the contents of our unconscious are constantly being projected into our surroundings, and it is only by recognising certain properties of the objects as projections or imagos that we are able to distinguish them from the real properties of the objects. – Carl Jung, “General Aspects of Dream Psychology,” The Archetypes and the Collective Unconscious, CW 9i, par. 507

Willy-nilly, we see our own unacknowledged mistakes and blind-spots in others. This is abundantly clear in personal quarrels and in politics. Without an unusual degree of self-awareness we seldom see through our projections; but if we do not we will be victimised by them. 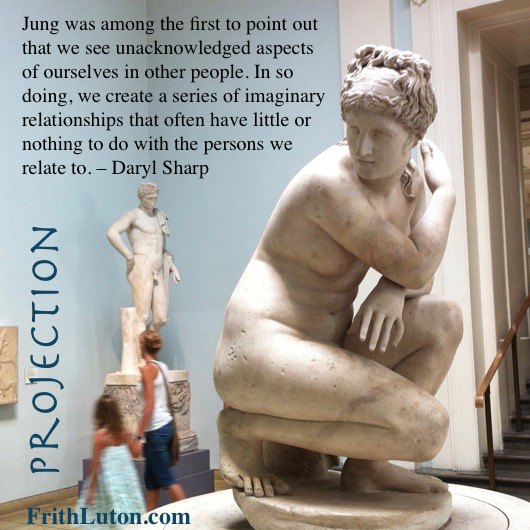 Our human nature inclines us to believe that the world is as we see it, that people are who we imagine them to be. However, other people frequently turn out to be completely different from the way we thought they were. If they are not particularly close, we think no more about it. If such an experience involves one of our intimates, we are rather more concerned and in some cases devastated.

Jung was among the first to point out that we see unacknowledged aspects of ourselves in other people. In so doing, we create a series of imaginary relationships that often have little or nothing to do with the persons we relate to. This is quite normal, a just-so story of life. However, psychological maturity depends in no small part on becoming aware of when, how and why we project.

Projection has generally had a bad press, but in its positive sense it creates an agreeable bridge between people, facilitating friendship and communication. Like the persona, projection greases the wheels of social intercourse. And as with complexes, life would be a lot duller without it.

There is passive projection and there is active projection. Passive projection is completely automatic and unintentional. Our eyes catch another’s across a crowded room and we are smitten, head over heels. Or we are immediately repelled by what we “see.” We may know nothing about that person; in fact the less we know the easier it is to project. We fill the void with ourselves. Active projection, also called empathy, occurs when you feel yourself into the other’s shoes by imagining what he or she is going through. This is a positive concomitant of most close friendships.

There is a thin line between empathy and identification. Identification presupposes no separation between subject and object, no difference between me and the other person. We are two peas in a pod. What is good for me must be good for him—or her. Many relationships run aground on this mistaken notion. It is the motivation for much well-meaning advice to others, and the premise of any therapeutic system relying on suggestion or adaptation to collectively sanctioned behaviour and ideals.

In close relationships, identification is as common as potatoes. When you identify with another person, your emotional well-being is intimately linked with the mood of that person and his or her attitude toward you. Neither can make a move without double-thinking the effect on the other, which automatically inhibits the self-expression of both. Such a relationship is psychologically no different from that between parent and child, nor is it easy to tell, at any given time, who is parent and who is child.

Projection, if it doesn’t go as far as identification, is actually quite useful in terms of self-knowledge. When we assume something about another person and then discover this to be an illusion, we are obliged to realise that the world and those in it are not our own creation. If we are reflective, we can learn something about ourselves. This is called withdrawing projections—bringing them home, so to speak.

On the whole, it only becomes necessary to withdraw projections when our expectations of others are frustrated. If there is no obvious disparity between what we expect, or imagine to be true, and the reality we experience, then there is no need to speak of projection at all.

Also on the positive side, it must be said that projection can constellate unrealised or dormant qualities in another person. Parental expectations notoriously lead one astray, but they can also be the stimulus to explore one’s potential. Many a grown man or woman owes his or her accomplishments to the urgings of a prescient friend or lover. As long as power over the other, or the projection of one’s own unlived life, is not lurking in the shadows, no harm is done. Indeed, in such cases it is better to speak not of projection but of genuine human relationship.

Where love reigns, there is no will to power; and where the will to power is paramount, love is lacking. – Carl Jung, Two Essays on Analytic Psychology, CW 7, par. 78