Hero.  An archetypal motif based on overcoming obstacles and achieving certain goals.

The hero’s main feat is to overcome the monster of darkness: it is the long-hoped-for and expected triumph of consciousness over the unconscious. [“The Psychology of the Child Archetype,” CW 9i, par. 284.]

The hero myth is an unconscious drama seen only in projection, like the happenings in Plato’s parable of the cave. [“The Dual Mother,” CW 5, par. 612.] 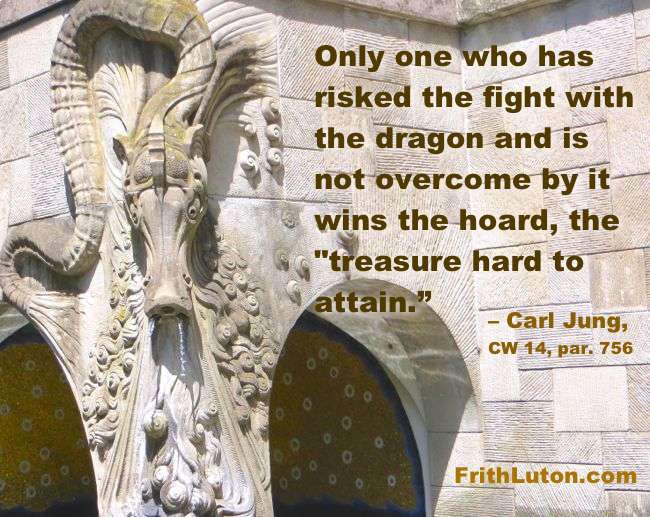 The hero symbolizes a man’s unconscious self, and this manifests itself empirically as the sum total of all archetypes and therefore includes the archetype of the father and of the wise old man. To that extent the hero is his own father and his own begetter. [Ibid., par. 516.]

Mythologically, the hero’s goal is to find the treasure, the princess, the ring, the golden egg, elixir of life, etc. Psychologically these are metaphors for one’s true feelings and unique potential. In the process of individuation, the heroic task is to assimilate unconscious contents as opposed to being overwhelmed by them. The potential result is the release of energy that has been tied up with unconscious complexes.

In myths the hero is the one who conquers the dragon, not the one who is devoured by it. And yet both have to deal with the same dragon. Also, he is no hero who never met the dragon, or who, if he once saw it, declared afterwards that he saw nothing. Equally, only one who has risked the fight with the dragon and is not overcome by it wins the hoard, the “treasure hard to attain.” He alone has a genuine claim to self-confidence, for he has faced the dark ground of his self and thereby has gained himself. … He has acquired the right to believe that he will be able to overcome all future threats by the same means. [“The Conjunction,” CW 14, par. 756.]

In myth and legend, the hero typically travels by ship, fights a sea monster, is swallowed, struggles against being bitten or crushed to death, and having arrived inside the belly of the whale, like Jonah, seeks the vital organ and cuts it off, thereby winning release. Eventually he must return to his beginnings and bear witness.

In terms of a man’s individuation, the whale-dragon is the mother or the mother-bound anima. The vital organ that must be severed is the umbilical cord.

The hero is the ideal masculine type: leaving the mother, the source of life, behind him, he is driven by an unconscious desire to find her again, to return to her womb. Every obstacle that rises in his path and hampers his ascent wears the shadowy features of the Terrible Mother, who saps his strength with the poison of secret doubt and retrospective longing. [“The Dual Mother,” CW 5, par. 611.]

In a woman’s psychology, the hero’s journey is lived out through the worldly exploits of the animus, or else in a male partner, through projection.