Home » Articles » The Father Complex – its Implications and Manifestations

Father complex. A group of feeling-toned ideas associated with the experience and image of father. (See also Logos.)

In men, a positive father-complex very often produces a certain credulity with regard to authority and a distinct willingness to bow down before all spiritual dogmas and values; while in women, it induces the liveliest spiritual aspirations and interests. In dreams, it is always the father-figure from whom the decisive convictions, prohibitions, and wise counsels emanate. [“The Phenomenology of the Spirit in Fairytales,” CW 9i, par. 396.] 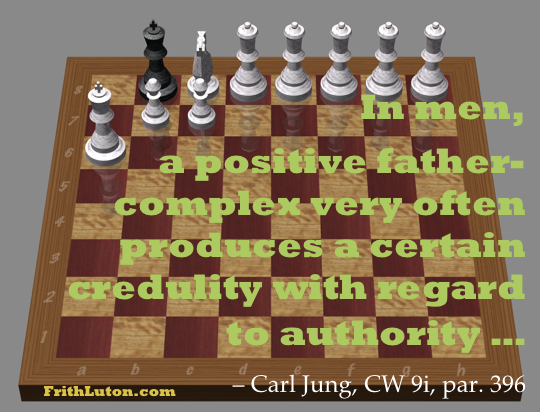 The father exerts his influence on the mind or spirit of his daughter – on her “Logos.”  This he does by increasing her intellectuality, often to a pathological degree, which in my later writings I have described as “animus possession.” [“The Origin of the Hero,” CW 5, par. 272.]

The father is the first carrier of the animus-image. He endows this virtual image with substance and form, for on account of his Logos he is the source of “spirit” for the daughter. Unfortunately this source is often sullied just where we would expect clean water. For the spirit that benefits a woman is not mere intellect, it is far more: it is an attitude, the spirit by which a man lives. Even a so-called “ideal” spirit is not always the best if it does not understand how to deal adequately with nature, that is, with animal man. … Hence every father is given the opportunity to corrupt, in one way or another, his daughter’s nature, and the educator, husband, or psychiatrist then has to face the music. For “what has been spoiled by the father” [A reference to Hexagram 18 in the I Ching (Richard Wilhelm edition, p. 80): “Work ok on What Has Been Spoiled.”] can only be made good by a father. [“The Personification of the Opposites,” CW 14, par. 232.]

Follow-up – Related article: The Mother Complex – its Definition and Implications