Descriptive of thoughts, feelings and actions that accord with reason, an attitude based on objective values established by practical experience. (Compare irrational – see below.) 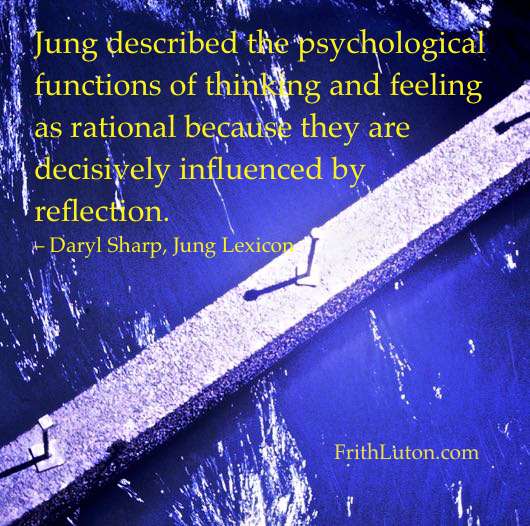 The rational attitude which permits us to declare objective values as valid at all is not the work of the individual subject, but the product of human history.

Most objective values – and reason itself – are firmly established complexes of ideas handed down through the ages. Countless generations have laboured at their organization with the same necessity with which the living organism reacts to the average, constantly recurring environmental conditions, confronting them with corresponding functional complexes, as the eye, for instance, perfectly corresponds to the nature of light. … Thus the laws of reason are the laws that designate and govern the average, “correct,” adapted attitude. Everything is “rational” that accords with these laws, everything that contravenes them is “irrational”. [“Definitions,” ibid., par. 785f.]

Jung described the psychological functions of thinking and feeling as rational because they are decisively influenced by reflection.

Not grounded in reason. (Compare rational – see above.) 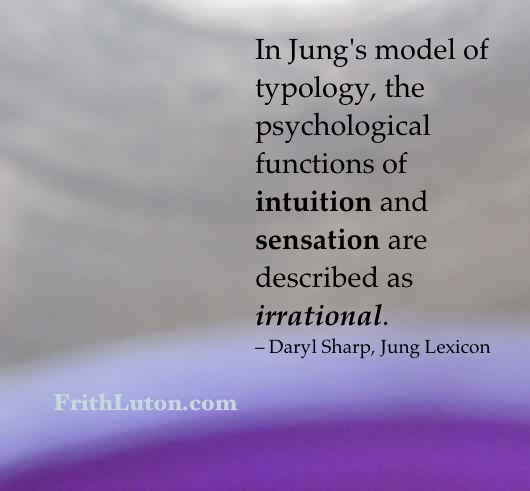 Jung pointed out that elementary existential facts fall into this category – for instance, that the earth has a moon, that chlorine is an element or that water freezes at a certain temperature and reaches its greatest density at four degrees centigrade – as does chance. They are irrational not because they are illogical, but because they are beyond reason.

In Jung’s model of typology, the psychological functions of intuition and sensation are described as irrational.

Both intuition and sensation are functions that find fulfilment in the absolute perception of the flux of events. Hence, by their very nature, they will react to every possible occurrence and be attuned to the absolutely contingent, and must therefore lack all rational direction. For this reason I call them irrational functions, as opposed to thinking and feeling, which find fulfilment only when they are in complete harmony with the laws of reason. [Ibid., pars. 776f.]

Merely because [irrational types] subordinate judgment to perception, it would be quite wrong to regard them as “unreasonable”. It would be truer to say that they are in the highest degree empirical. They base themselves entirely on experience. [“General Description of the Types,” ibid., par. 616.]